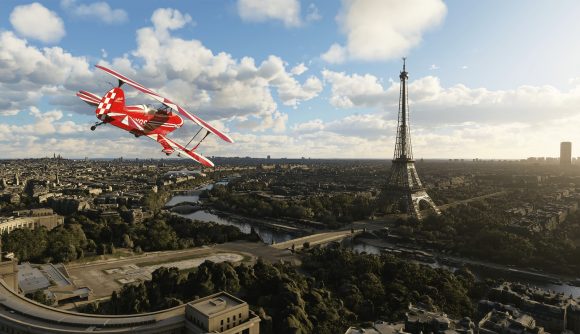 Just a touch behind schedule, Microsoft Flight Simulator’s World Update 4 has arrived. The major update to the simulator game focuses its attention on France and the Benelux Union, adding a huge list of new points of interest, some new hand-crafted airports, and new activities – plus some welcome tweaks and fixes.

The free update adds more than 100 new points of interest to France, Belgium, the Netherlands, and Luxembourg in Flight Simulator, as well as to several other areas in the game. Now you’ll be able to swing by Reims Cathedral and the Royal Saltworks at Arc-et-Senans before taking in Luxembourg’s Musée Draï Eechelen and Vianden Castle on your way to the Palais de Justice in Brussels.

Head across the Atlantic to take in the revamped lighthouses at the Caserne Loubère military base in French Guiana, Pointe aux Canons in Sainte Pierre, and on the La Caravelle peninsula in Martinique. You’ll have newly handcrafted airports to work out of once you download the update, too: there’s the tiny Megève altiport high up in the French Alps, Nice Côte d’Azur Airport on the gorgeous Mediterranean coast, and Rotterdam The Hague Airport, for all passengers bound for visits to the International Criminal Court.

Asobo Studio has added new photogrammetry for Paris and Amsterdam, and included “visual and logic improvements for 100 additional airports” in World Update 4. There’s also a new Landing Challenge at La Salette, and a new Bush Trip that takes you through the Pyrenees and the Alps. Lovely.

If you can see your house from up here, bonjour/hallo to you!

Take to the skies over some of Western Europe's treasures in the latest Microsoft Flight Simulator World Update: https://t.co/rdzf5zPlyY pic.twitter.com/U3DX53ajqj

To download the patch, you’ll first want to move any community packages you’ve downloaded to another folder temporarily while the update installs. Then, launch Flight Simulator and install the content update you’ll see when the menu pops up. Once that’s done, you’ll be able to head to the in-game marketplace and download the free France/Benelux content update.