Microsoft and Intel have announced a new PC partnership, codenamed “Project Evo,” at an hardware engineering event in Shenzhen, China. I could be wrong, but I think it means they want to make PCs.

Every proper gaming PC needs a good screen, so check out our pick of the best gaming monitors around today.

The announcement of Project Evo suggests they’re looking to badge up new PCs that are capable of gaming, mixed (virtual and augmented) reality and which let you shout at them from across the room using Cortana.

The Project Evo partnership is essentially being designed to deliver machines capable of working with Microsoft’s nascent budget VR ecosystem by providing affordable machines with the power to deliver mixed reality experiences. Given that it’s a collaboration with Intel Project Evo may well also link into what they’re trying to do with the wireless Project Alloy device Intel showed off at the Intel Developer Forum this year.

Microsoft also talk about Project Evo machines needing to be powerful enough to run eSports titles, support game broadcasting, can output at 4K (though not necessarily game at 4K), deliver HDR content, Wide Color Gamut, spatial audio and support the new Bluetooth Xbox controllers. They are listing the gaming category as a separate thing, suggesting mixed reality gaming is not an expected part of the new standard.

It’s all about making mixed reality mainstream, with a set of promises listed in their announcement for how that’s going to happen next year.

More than 20,000 universal Windows apps in the catalog.

3D objects from the web using Microsoft Edge to drag and drop into their physical world.

360 degree videos available for the first time in the Movies & TV app. 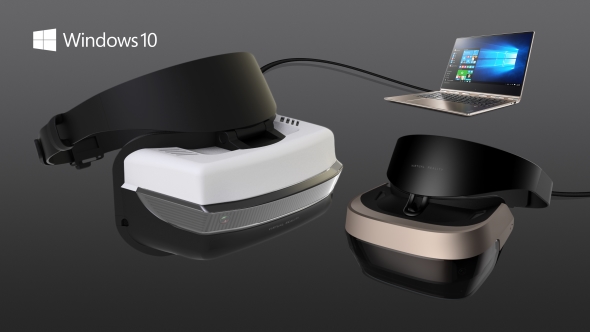 So, Microsoft reckon next year is finally going to be the year of VR, or mixed reality. That’s exciting. I mean, it’s not like people have been saying that every December for the last few years, is it? For my part though, I’m struggling to believe it. Virtual/mixed reality systems will continue to improve, and they will become more widespread than they currently are but will continue to only be a tiny subset of the computing world.

It’s great that the big guns of Microsoft and Intel are working together to create some sort of minimum standard for PCs, meaning we will at least have a starting point to work from, kinda like when Intel created the wireless Centrino standard for laptops. But then Apple will probably turn up with a me-too, ultra-expensive, closed down, mixed reality platform and the turtle neck brigade will herald it like the second coming of Jobs.