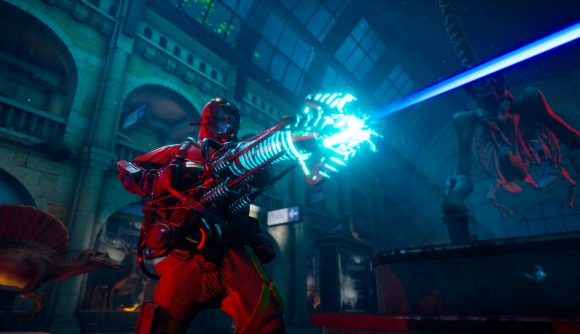 Now’s your chance to try out the chaotic multiplayer action of Midnight Ghost Hunt, developer Vaulted Sky Games’ spin on Prop Hunt and those horrible little mimics from Prey. A closed beta is running this weekend, now through Sunday evening, and you can get in simply by asking for access on Steam.

The closed beta is already underway, and it’ll run until 11:59pm PST January 30, which translates to 2:59am EST / 7:59am GMT. It’s a 4v4 game of hunters versus ghosts, and in the initial phase, the ghosts try to avoid hunters by hiding inside various props scattered throughout each level. The hunters have to move quickly to find the ghosts, because at the stroke of midnight, it’s payback time: the ghosts are empowered with boosts to strength and resilience, and the hunters will have to batten down the hatches and hope they can hold out long enough to be rescued.

Our hardware writer Phil Hayton had a terrific time with his Midnight Ghost Hunt preview session, and Vaulted Sky Games says the closed beta it ran in October was “highly successful.”

If you’re up for some busting of ghosts, you can head to the Midnight Ghost Hunt Steam page and press the button to request access to the beta. The game will launch in Early Access later this year.