The Caves & Cliffs update for Minecraft showed us a lot of exciting new features, but the showcase didn’t delve very deep on all of the upcoming changes. We saw a lot about the Lush Caves biome, but it’s not the only underground biome that’s coming to the Minecraft 1.18 update as the Dripstone Caves were also shown off briefly. The Dripstone Caves were originally planned for the 1.17 update, but they were pulled right before launch.

Unlike the Lush Caves, the Dripstone Caves are the closest to vanilla Minecraft’s underground areas. If anything, they seem a fair bit like the massive and open cave areas that are already in the game, just with a whole bunch of extra cave stuff – that’s an official term, cave stuff.

Still, bog-standard caves are now their own proper biome, and while Mojang kept quiet on a lot of their features during Minecon 2020, there are still things to talk about. But before we go too far into this, let’s give the customary disclaimer about the difference is between stalactites and stalagmites. Stalactites are the rock spikes that form on the ceiling, while stalagmites are the spikes that form from the ground. A useful way to remember it would be to look at the spelling: Stalactites = ceiling, Stalagmites = ground. Honestly, what would you do without us?

Let’s begin with the ceiling dwelling stalactites. If you break them at the base, these can fall down and hurt you or other entities if you stand underneath them. They also drip water that you can collect in cauldrons, which gives you an infinite water resource. If you pop one of these from afar with an arrow, you might clear out some Minecraft mobs below. 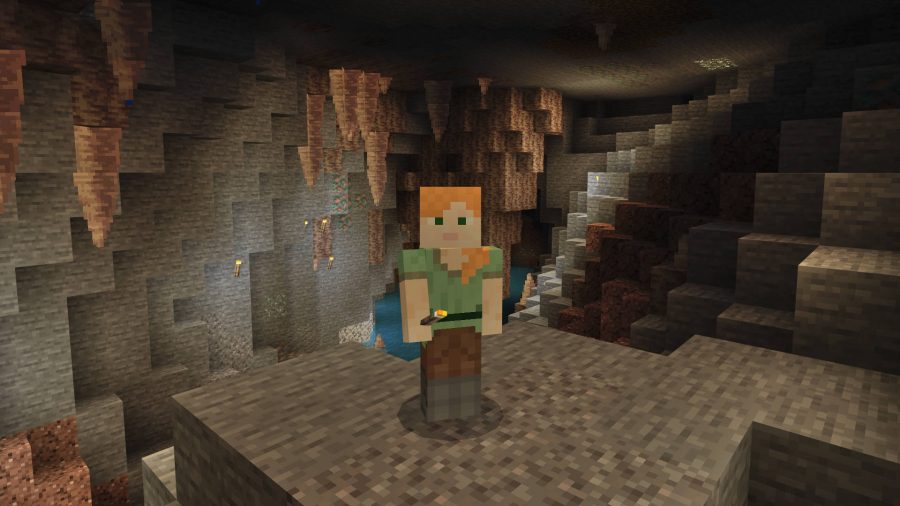 Stalagmites, on the other hand, are essentially just massive spikes. Should anything fall on top of them, they will take a large amount of damage. They can also be broken and disintegrate in much the same way as a falling stalactite. You can collect both stalactite and stalagmite pieces once broken, which could help make things such as a spike trap or a way to collect water in cauldrons in your home base.

The following mobs spawn in the Minecraft Dripstone Caves:

That’s everything we know about the Minecraft Dripstone Caves. In the meantime, why not check out details on some of the other updates? We saw copper for the first time during Minecraft Live, as well as details about three new mobs: the warden, the goat, and the axolotl. We hope to learn what’s lurking in the Dripstone Caves soon!