Trying to find an End Portal in Minecraft? If you want to travel to the End, then there’s only one means of transport – an End Portal. Taking the leap into another dimension takes commitment, as once you dip a toe in the End Portal, there’s no backing out.

We’re sure you’ve got your reasons for visiting the End. Maybe you want to take down the fearsome Ender Dragon, maybe you need some precious resources like End Stone or Chorus, or perhaps, like us, you just like the bleak endless view of the void. Whatever your reason, you’ll need to hop into an End Portal to get there.

End Portals can only be found in the portal room of a stronghold, and you need to venture quite deep into the stronghold to find it, but once you do, you’ll find it hanging over a pool of lava. To activate the End Portal, you need to place an Eye of Ender on each of the 12 frames lining the portal. Most End Portals already have some Eyes of Ender already in place, with a 10% chance of generating with an existing eye.

Once you step onto the activated End Portal, you’ll immediately be transported to the End, without any way of stopping it. Once you arrive at the End, you’ll spawn in the middle of a central island, with smaller islands visible around to explore. To access these outer islands, or to leave the End, you’ll need to defeat the Ender Dragon found on the main island. This will open up a portal to either ‘complete’ the game and return to the regular Minecraft overworld as we know it – or further explore the outer islands. 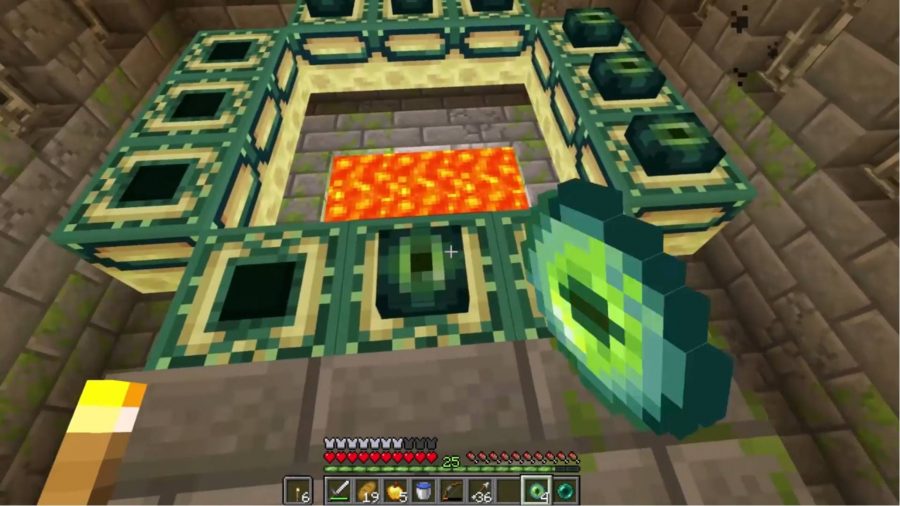 How to create an End portal in Minecraft

Although in survival mode, you’ll need to find a stronghold to activate an End Portal – in creative, you can create your own. Here’s the End Portal recipe:

Mark out a 3×3 section on the ground, then once standing inside that zone you need to line your Portal Frame Blocks along the perimeter of that 3×3 square. Finally, place all 12 of the Eyes of Ender in their respective blocks to activate the End Portal. Make sure that all of the Eyes of Ender are placed vertically as the portal won’t open if even one is placed horizontally. You’ll know it has worked when you can’t see the lava (if you’re looking at the stronghold version) or the ground (your own created version).

If you’re travelling to the End, make sure you come prepared to take on the Ender Dragon and all the other Minecraft mobs lying in wait. Here’s how to build a Minecraft shield, as well as how to enchant your weapons for the best chances of completing Minecraft and returning to the overworld in one blocky piece. If you’re struggling to find a stronghold, these Minecraft seeds containing End Portals cut right to the chase.