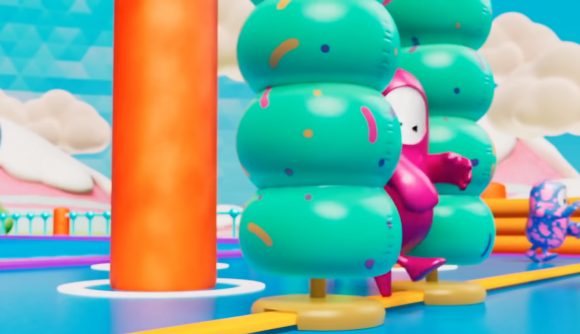 It was only a matter of time until we saw delightful bumble royale Fall Guys pop up in Minecraft, but it was certainly worth the wait. One busy Minecraft builder has created an assault course that compiles a few of Fall Guys’ levels, making it a greatest hits run of sorts.

Reddit user Henry_Cat735‘s crash course starts with Fall Guys’ TipToe level. To get past it, you have to find the correct path to the end by stepping on the right tiles. Once you get through that, you’ll come to Gate Crash, which you’ll remember as the level with moving doors. After that, you’ll get to a plate with a rotating log that you have to clear.

As the Minecraft player’s run ends, he comes to something reminiscent of the multiplayer game’s Hex-a-Gone level. That one involves several floors of tiles that disappear once you step on them. It’s undoubtedly an impressive build. As the Minecraft builder explains, he got it all working by using command blocks, and it took him around two-and-a-half hours.

If you’d like to download it yourself, you can find the link to Henry’s Gdrive folder here, and you can get it to work by taking the folder in drive and dragging it to ‘.minecraft\saves folder’ – do keep in mind, though, that it’s on the Java version and not Bedrock.

If you’d like to check out some other Minecraft goodies, then we have a list of the best Minecraft mods and seeds.

I made Fall Guys in Minecraft with Command Blocks from Minecraft

Over in Fall Guys world, we recently found out that Fall Guys season 2 will bring about a heap of medieval-themed skins and levels. Oh, and a big ol’ hammer called Big Yeetus is on the way. It’s probably fine.