Looking for the Minecraft hopper recipe? If you’ve got a complex Minecraft farm set up, or any kind of efficient resource collection system, you’re probably going to need a hopper – or face an organisational nightmare.

For the uninitiated, Minecraft hoppers are essentially funnels that can transfer items between containers. The hopper itself has five inventory slots, and, at an interval of four redstone ticks (0.4 seconds) will pull a single item at a time into that inventory from a container above it, and/or push a single item at a time from its inventory into a container that it is facing. Hoppers will also collect floating item entities that land on top of them, if there is no container there.

There’s a bit of finesse required to get your hoppers to output in the direction you want them to; they don’t orient themselves automatically, so you’ll need to face where you want the hopper to output when you place it. If you’re facing an interactable block, you’ll interact with it instead of placing the hopper, unless you sneak while placing it. Here’s how to craft a Minecraft hopper: 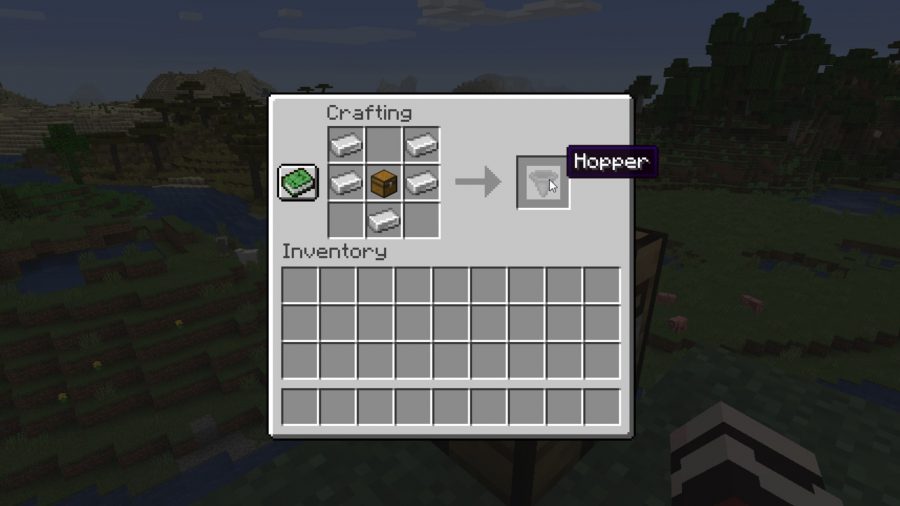 To craft a hopper, you’ll need a chest, and five iron ingots. Using a crafting bench, put the chest in the middle, and arrange the ingots in a v-shape around it. Voila – hopper’s ready.

If you want to relocate your Minecraft hopper, be sure to use a pickaxe, or else you won’t retrieve it when it breaks. Alternatively, for a more portable solution, you can create a minecart with a hopper attached by simply placing a hopper above a minecart on a crafting bench.

A hopper doesn’t need Minecraft redstone to work – in fact, a redstone signal will deactivate a hopper, locking it and preventing it from pulling and pushing, however, it can still be pulled from and pushed into.

That’s everything you need to know to create a hopper in Minecraft and kick off some funneling fun. For your next project, why not take inspiration from the best Minecraft YouTubers and embark on some exciting Minecraft builds, or go exploring in one of the coolest Minecraft seeds we’ve found.