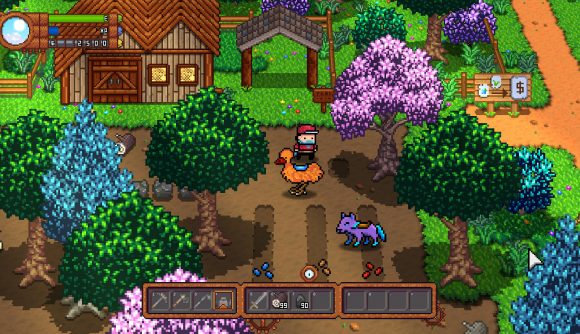 ‘Monster Harvest’ sounds like it could be an extremely bloody anime mash-up of Monster Hunter and Devil May Cry, but it turns out it’s a much more wholesome affair. It’s a farming sim like Stardew Valley, where you meet people in your community as you tend a farm, growing crops that you’ll eventually lead into battle like Pokemon. Developer Maple Powered Games has announced that Monster Harvest will arrive on Steam May 13.

At its base, Monster Harvest is similar to Stardew Valley. You’re a kid in a colourful little pixel-art town, and it’s your job to build out your farm by choosing crops to plant. You’ll explore the village and meet new people, buying supplies from the local vendors and keeping an eye on the seasons. Things take a turn, however, when you discover strange slimes – it turns out, these can mutate your crops and turn them into ‘planimals,’ which become your trusted companions and bodyguards.

The slimes will have different effects depending on which crops they’re added to, and the season in which they’re used. In all, Maple Powered Games says, there are 72 different mutations possible. They’ll square off with enemies you encounter in familiar Pokemon-style turn-based battles.

You and your planimals will eventually leave the farm and venture forth across the land in a quest to stop the evil SlimeCo corporation from doing whatever evil corporate things it has planned for your idyllic world. In addition to tending crops and raising planimals, you’ll also be able to craft “dozens of items” to use on your farm and in your home.

Monster Harvest arrives on Steam and Nintendo Switch digitally May 13, with Xbox One and PlayStation 4 versions following June 3. Physical editions will be available for Switch and PlayStation 4 June 4 in Europe and June 8 in the US.