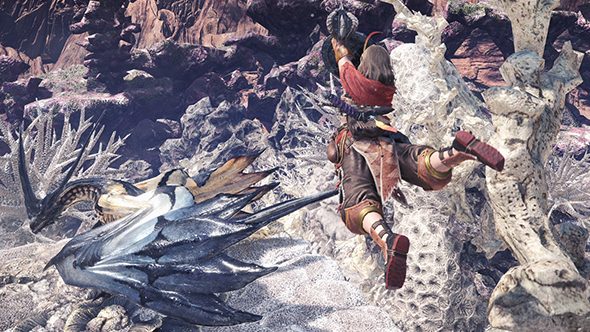 Monster Hunter: World is coming to PC next month, with the alluring promise of higher resolutions and better frame rates than its console brethren. But another feature we love on PC – mod support – apparently won’t be in the game. At least not at launch.

Capcom says it doesn’t have anything to announce regarding Monster Hunter: World mod support or Steam Workshop options “at this time.” That, of course, doesn’t rule out future updates adding mod support, but i’d assume that if it were to be a launch feature, we’d have heard about it in this first info dump.

Sharpen your blades and boost your stats in the best RPGs on PC.

Community manager Yuri Araujo made the not-announcement via Twitter in response to a fan’s question. In lieu of mod support, you are getting 60fps, but you’re taking that with some stiff system requirements and the always-controversial inclusion of Denuvo.

So don’t expect custom weapons and skins in World anytime soon. There’s nothing to stop clever modders from adding fresh content to the game regardless of Capcom’s official support, of course, though that may prove difficult if the game hasn’t been built with custom content in mind.

Other long-delayed console-to-PC conversions have offered up solid modding tools, most recently Final Fantasy XV. Nothing there is truly essential, but it is nice to at least have the option of playing as the Power Rangers.

Even without a few features we’d hoped for, improved performance should make the PC edition the best when thatMonster Hunter: World release datecomes around. Check out the trailer above for a look at what to expect.