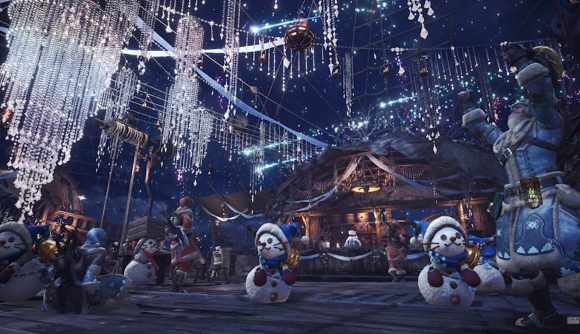 Monster Hunter: World waited more than seven months to come to PC after launching on consoles in January, so we’ve been playing catch-up when it comes to the game’s limited-time seasonal events – until now. When the Winter Star Festival kicks off for consoles, PC players will get to join in the fun too.

The Winter Star Festival is, of course, Monster Hunter’s winter celebration. The Gathering Hall is getting lavishly redecorated with crystal chandeliers and ice sculptures, and the staff will be changing into furry Scandinavian-style snow gear (the Handler looks like she’s auditioning for an early ABBA video).

The Winter Star Festival runs November 30 to December 17, and during that period you’ll be able to craft a new armor set, new layered armor, new Palico gear and Poogie outfit, all of which you can make by collecting event tickets. You’ll earn a ticket every day you log in during the festival, and by completing daily event quests.

Additionally, during the festival, you’ll be able to take on any of the limited-time events that have appeared to date. That’s one of the places where the PC and console versions of the festival differ: since console players have had seven more months’ worth of special events, they’ll have that many more events to pick from. But on PC, it’s still a chance to chase down the Dante armor set from Devil May Cry, or take on the massive Kulve Taroth hunt with friends.

In this video, Monster Hunter YouTuber Arekkz explains what you can expect from the Winter Star Festival:


If you’re into just getting into Monster Hunter, Arekkz’ channel is a valuable resource – he’s got handy guides for all the weapons, great tips on builds, and he’s also on top of all the latest news. Of course, you can also refer to our handy Monster Hunter: World guide.

In any case, if you’ve missed any of the past Monster Hunter: World events on PC, the Winter Star Festival will be a chance to catch up – so once you’ve cleared all the snow out of the driveway, clear some time out on your schedule for holiday huntin’.