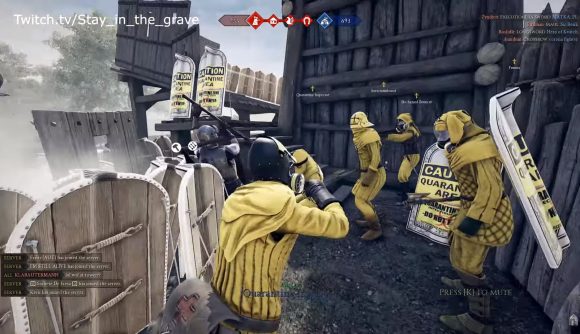 As coronavirus ravages the planet, people are naturally being more mindful of precaution – and that apparently includes Mordhau players. A group of them have taken it upon themselves to enforce an in-game quarantine, donning specially-made personal protective equipment and checking fellow players for signs of infection. The results are Mordhau to a T: strange, pointless, and oddly impressive.

The group of players organised in a Discord for a Twitch streamer and YouTuber who runs the channel Stay in the Grave, and they’ve created custom Mordhau skins that can be found through the Discord server. The outfit includes a bright yellow set of cloth armour, complete with black rubber gloves and a modern gas mask, plus a barricade emblazoned with quarantine warnings and biohazard symbols.

As you can see in the video below, the group puts their new gear to use by setting up infection checkpoints. Hapless players who wander in must submit to testing – and hilariously, several of them willingly play their part, using Mordhau’s gesture system to go through the motions of raising arms and whatnot for the inspectors.

It’s not all completely voluntary, mind you – one of the team members usually has a crossbow trained on the inspectee. Watch:

The video quickly devolves into your more typical Mordhau shenanigans, which include dropping large rocks on enemies’ heads, and skillfully using the biohazard door barricades to get in sneaky punches. There’s certainly a lot of skill on display here, along with the general absurdity of the bright yellow hazmat gear.

Of course, in the time period depicted in Mordhau, people were probably more concerned about the spread of the bubonic plague – but unfortunately it would still be some time before the germ theory of disease made it to Europe.

This isn’t the first (and won’t be the last) time Mordhau players have delighted in annoying each other – shortly after the game launched, players figured out how to glitch into each other’s character selection screens, and immediately started playing Despacito on their lutes. That’s just how Mordhau is.