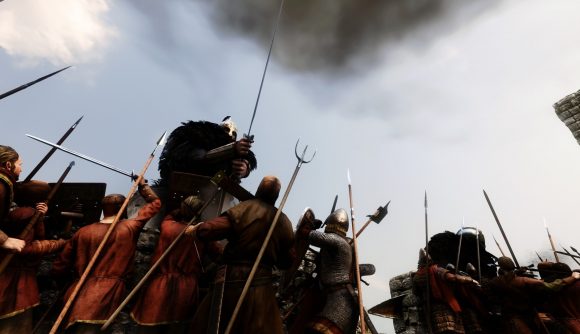 Mount & Blade II: Bannerlord lets you put together an army however you see fit – and the way we look at it, there’s no better way to build an army than to recruit a bunch of Norse giants. Thanks to the Jötnar of Sturgia mod, now you can do exactly that.

As the name suggests, the mod adds a new race of recruitable troops: the Jötnar of Viking myth. Modder ThisIsSovereign says the mod attempts to include this admittedly non-human race of giants into Bannerlord in “as lore friendly a way as possible”, which isn’t as much of a stretch as you might initially think. Nordic people are referenced in the open-world game, and so if you relax the ‘historical accuracy’ requirement a bit, there’s room for some big ol’ Jötnar on Calradia’s battlefields.

They’ll show up rarely as recruitable units by default – about 20% of Sturgian Recruits are replaced with Jötunn Recruits. There’s a full upgrade tree for the Jötnar, so they don’t have to stay at the recruit level. They can be trained to become powerful ranged, polearm, or melee units, eventually reaching the ranks of Chosen of Ymir, Chosen of Fenrir, or others. In total, there are 15 different unit types for the Jötnar included in the mod.

The mod is actually three separate modules, and you’ll need to install at least two: there’s the baseline Jötnar of Sturgia, which adds the troops to the game, and the Jötnar skins. This second module uses the Detailed Character Creation mod, and it has to be placed at the top of your load order for the game to use it.

Optionally, you can also install the Sons of Fenrir module. This adds a whole new clan to Sturgia, and it has its own unique NPCs, along with new Sturgian towns for them to occupy. This module requires you to start a new save, but the good news is that if you start as a Sturgian lord, you’ll begin the game with 20% of your troops being Jötnar.

Check out our guide to Bannerlord mods for more info, and be sure to follow the installation instructions on the mod page carefully. This one can be tricky to get to work.