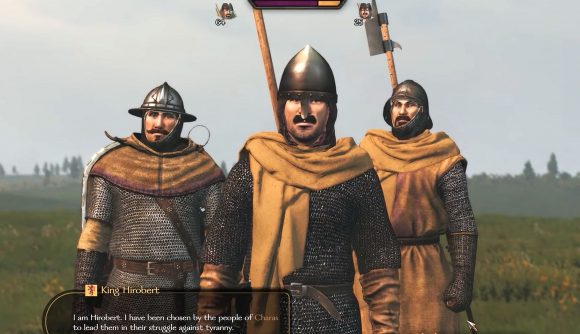 Mount & Blade 2: Bannerlord just got its 1.5.6 update, which adds a host of new features to TaleWorlds’ action-RPG game, including a key new feature that’ll add a new layer of challenge: Rebellions. That means unhappy folk will soon be able to rise up and express their discontent by trying to take control of settlements. Gulp.

There are some other notable new additions in this patch, including 14 additional villages and battle terrains for more map variety. The update also adds “15 different perks about stewardship, roguery, and medicine,” and lets you grant perks to clan members without putting them in your party. You can see the extensive patch notes on the official site.

Rebellions are the biggest addition. “The loyalty and security of a settlement is affected by a number of things, such as if there is a culture mismatch between the settlement owner and its inhabitants, whether the town was recently captured, the strength of the garrison, kingdom policies, governor skills, and so on…,” the studio outlined a development update post in December. When a settlement’s loyalty dips, the dev explains, you’ll find more and more of its hitherto happy folk will start to “take up arms in the form of militia”.

If that militia hits a tipping point – that is, if it feels it’s in a stronger position that the settlement’s garrison and loyalty reaches a low enough level – a Rebellion will kick off.

A clan will take over and start to establish itself as the clan. If successful for long enough, the new ruling clan will become firmly rooted enough that other clans will recognise it, and diplomacy between them becomes possible. Gulp. You can get an idea of this feature in the Development Update #6 clip below:

This will be exciting news for fans keen to see this kind gameplay mechanic folded in the game. Since Bannerlord’s launch earlier this year, popular community creations such as this Revolutions mod have been created to add something along these lines to the title.

While you wait for your update to download, be sure to take a look at our Bannerlord cheats, Bannerlord workshops, and Bannerlord money guides for some tips.