Take a quick glance at the specs of MSI’s latest 27-inch display, and it looks like the Optix MAG274QRF-QD has all the hallmarks of the best gaming monitor: a super-low 1ms refresh rate, lofty refresh rate, and great viewing angles and colours from its its IPS quantum-dot panel. Compatibility with AMD’s FreeSync and Nvidia’s G-Sync helps you boost fps on the best graphics card, too.

It’s marketed by MSI as an esports monitor, but unlike cheaper competition-oriented models, it packs an IPS panel and HDR support, meaning it’s ideal when you kick back to watch movies and take in the most stunning-looking PC games, too.

You’ve probably heard the praises for high refresh rate monitors before, being a delight to use in high fps gaming, while also giving a snappier feeling while scrolling and going in and out of applications. At $449 / £499, there are a couple of similarly-priced and specced rivals, such as the Asus TUF VG27AQ and Acer Predator XB273UGS, but it still holds its own and is even in the running to overthrow the $599 Viewsonic Elite XG270QG as our favourite monitor.

Taking the MAG274QRF-QD out of the box, attaching the stand is as easy as it gets. It’s just two screws into the back of the VESA mount (that’s great news if you’re planning to mount the screen to an arm or wall), and one more hand screw to put the two parts of the stand together. 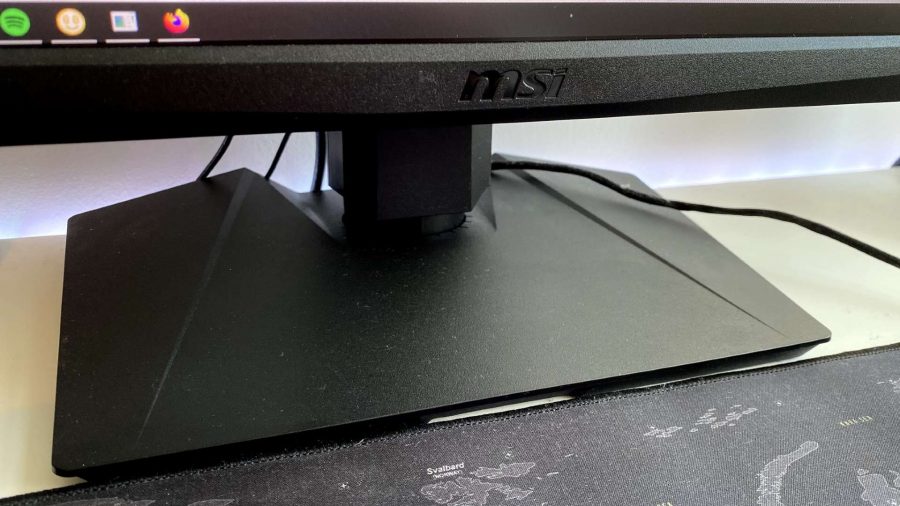 The stand is a nice hefty construction, and unlike my usual Samsung display, I can hammer away at the best gaming keyboard as hard as I want without the annoying screen wobble I used to get. The stand’s square shape makes it look bigger than it really is – it’s actually a pretty diminutive footprint. On my 23-inch-depth desk, my XXL mousepad is a pinpoint perfect fit. The stand’s got all the adjustability you’d want, adjusting for angle, rotation, and height, giving you the perfect ergonomics to pair with the best gaming chair. 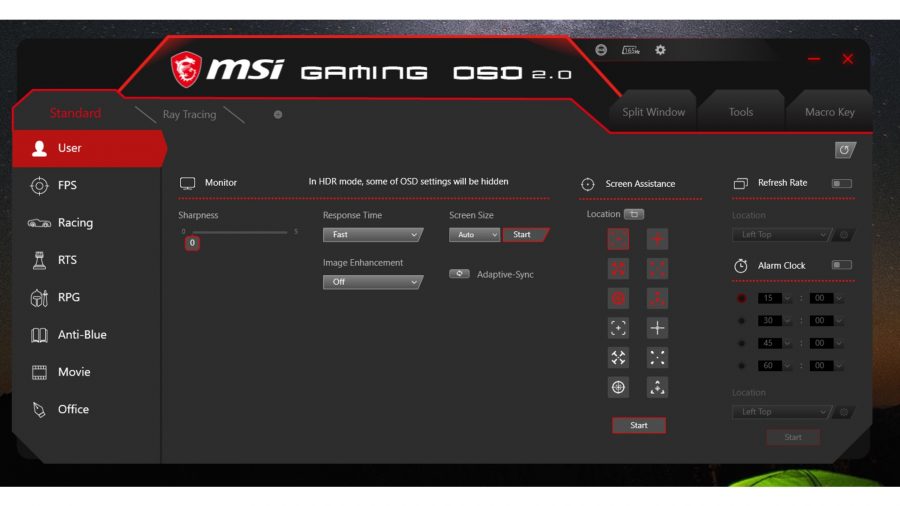 Alongside a dedicated power button, there’s a five-way navigation joystick on the rear, which gives you quick access to certain monitor features depending which way you switch it. Flicking it down lets you add a virtual crosshair, pressing it right changes the input source, and pressing it down accesses the monitor settings to tune the display to your liking. You can also do this with MSI’s Gaming OSD software, which is a much more intuitive experience – you just need to plug in the included USB Cable into your computer. Here, you can select different screen profiles depending on the game you’re playing.

There are no built-in speakers, but that’s no loss. Even if they were included, a set of the best computer speakers would be far better for your ears. If you still want to route audio from your connected HDMI inputs, there’s a 3.5mm output jack on the rear. 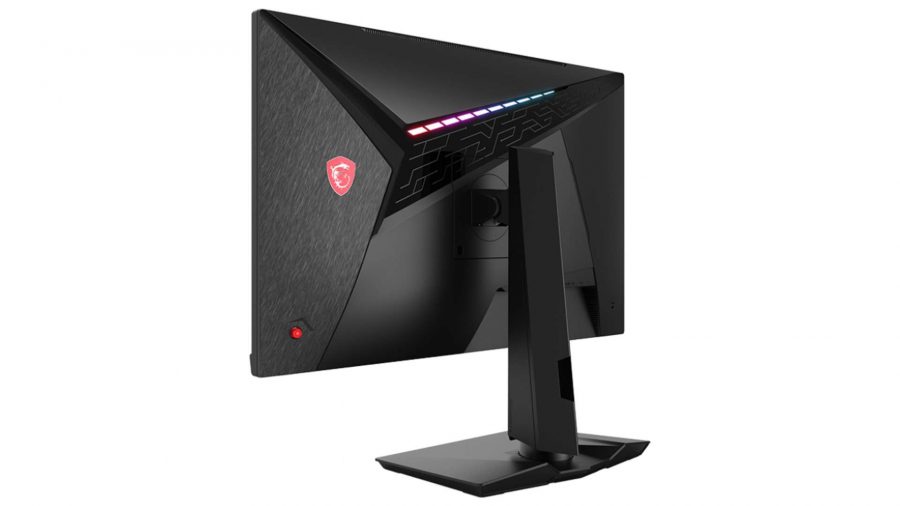 You’ll also see some RGB lighting on the rear that can be fully customised within the gaming OSD software. It’s a little pointless, though, as it’s not bright enough to have much effect, even in a dark room. From the front, there’s not much that outs this as a ‘gaming’ monitor – whether that’s a pro or con is up to you, but I prefer its clean design. Other than having to increase the dim default brightness, the rest of the screen’s out of the box settings feel perfect for me.

Moving to the Optix from my 60Hz 4K Samsung monitor, I instantly feel the near-tripled refresh rate of 165Hz even before I jump into a game. Every movement of my mouse cursor, along with scrolling of web pages and tabbing in and out of windows feels so much smoother and snappier. The 1440p resolution is perfect for this refresh rate, as even a card like the RTX 3080 will still struggle to run the latest PC games in 4K with such a high frame rate.

I saw that welcoming ‘G-Sync compatible display connected’ Windows notification as soon as I powered the screen up. A monitor aimed at esports needs to have a focus on fast response, so bypassing the problematic Vsync with both G-Sync and Freesync support for both Nvidia and AMD graphics cards is a big plus. Combine all of the above with a 1ms response time, and this screen shines in fast-paced competitive games like CS:GO, with smooth movements and zero latency – certainly living up to its esports designation. 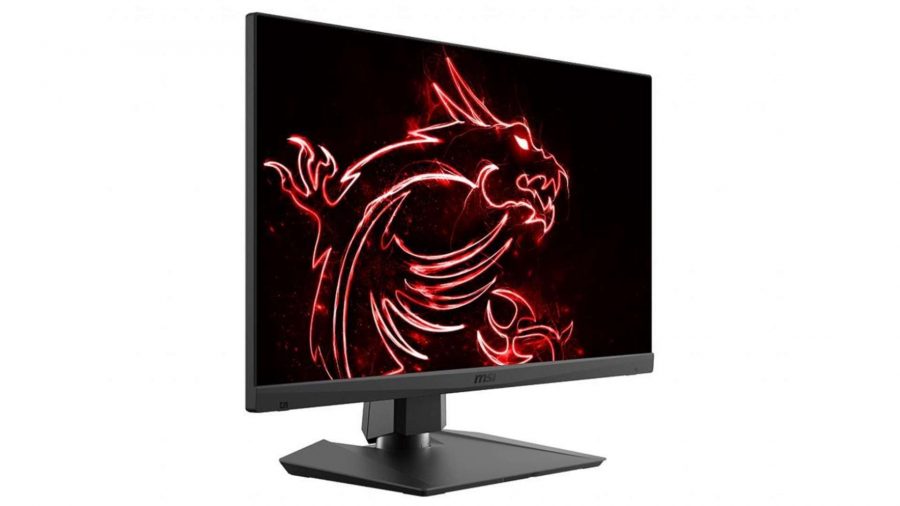 The IPS panel has exceptional viewing angles and realistic colour reproduction, further helped thanks to the quantum dot technology onboard. While VA panels are renowned for darker blacks, the HDR support on this IPS panel still manages to give great contrast in supported games, such as Forza Horizon 4 and Red Dead Redemption 2. HDR support has been somewhat patchy in the PC world when compared to consoles, but with Microsoft launching Auto HDR in a future Windows update, even more games will be able to take advantage of the great feature on this monitor..

With a $449 MSRP, it’s priced pretty competitively priced in the market, sitting much closer to Asus’s $429 TUF Gaming VG27AQ than the $599 Viewsonic Elite XG270QG we once held in such high regard. Doing all its competitors do and more with quantum dot technology, this price tag helps the MSI Optix MAG274QRF-QD stand above the others as our new favourite.

If you’re finally looking to move from your old 60Hz panel to a high refresh rate monitor, or you just want the gaming monitor that’s a dab hand at both great colour recreation and responsiveness, then MSI’s new offering won’t disappoint.