The best computer speakers aren’t intrinsic to every gaming PC setup, especially since the best gaming headsets can give you the edge in FPS games. Of course, injecting your ears with gaming sounds comes with the caveat of being tethered to a desk. And while the best wireless gaming headsets can provide you with a degree of freedom, there’s nothing quite like filling your gaming cave with high fidelity audio.

Speakers are commonplace within many of the best gaming monitors and laptops, but convenience usually comes with compromise. While integrated speaks work just fine, they often produce tinny audio and a distinct lack of clarity and definition in comparison to good quality, standalone computer speakers.

Naturally, there are a wide range of specs and price points to consider when it comes to computer speaker sets. Whether you’re looking for a cheap set of speakers, the best soundbar, a surround sound extravaganza, or you’re looking to upgrade to true audiophile sound quality, we’ve rounded up the top speakers to sit on the best gaming desk. There are even some with RGB lighting if that’s your bag.

Here are the best computer speakers to buy in 2022: 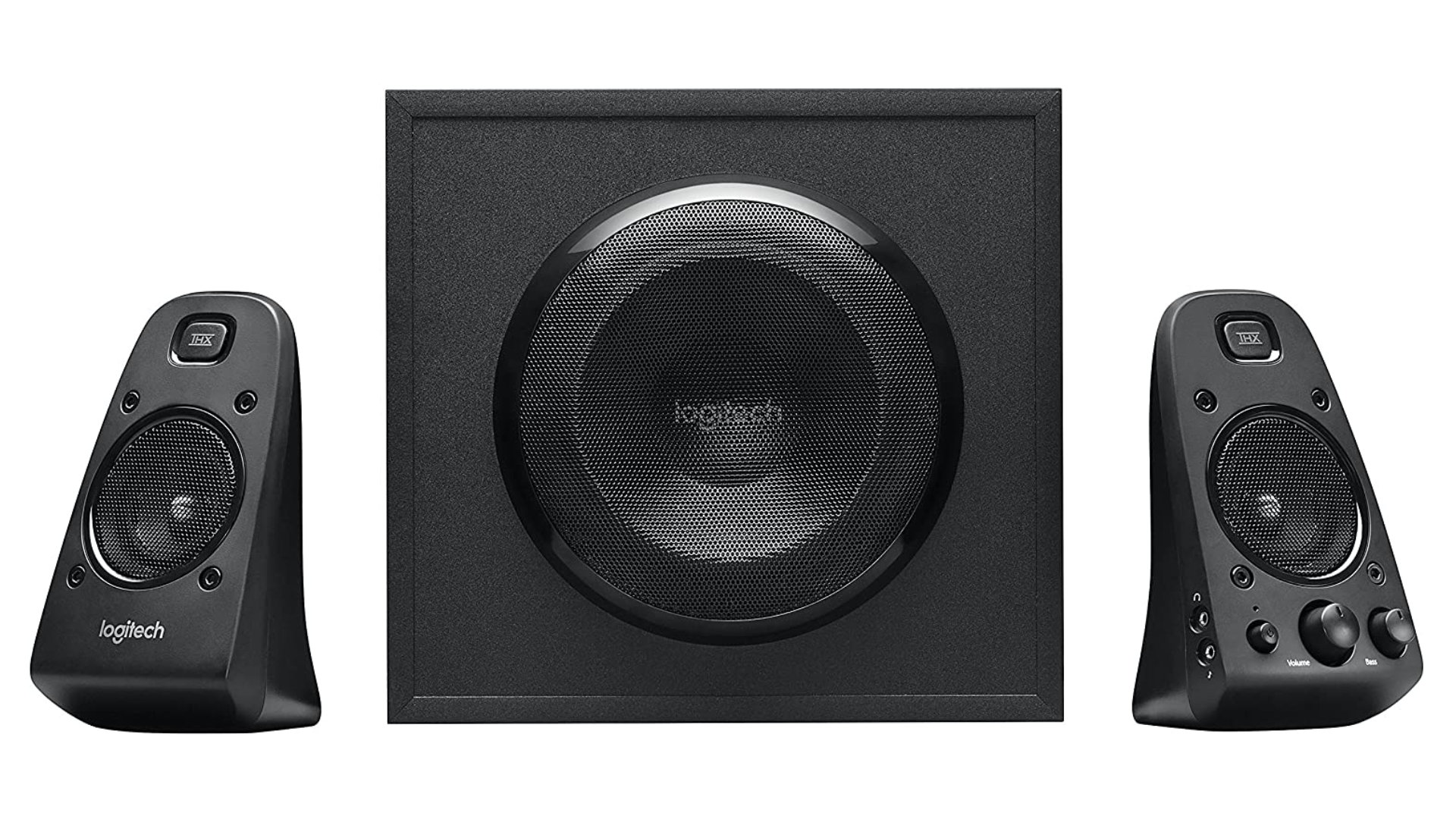 The best computer speakers are the Logitech Z623.

This 2.1 stereo setup from Logitech is a great all-rounder, giving you quality stereo audio at a price that won’t break the bank. The set consists of two 35W satellite speakers and a 130W subwoofer. With THX certification, which is only awarded to top-of-the-line speakers, it’s the perfect set for immersive gaming and movie experiences.

The subwoofer provides enough bass to raise eyebrows around the house, which you can tune with a dedicated dial. The speakers get more than loud enough without any distortion, and they’re a substantial step up over your built-in monitor speakers. Plus, they’ve got a handy audio out port on the speaker to easily plug in the best gaming headset should the neighbours complain. 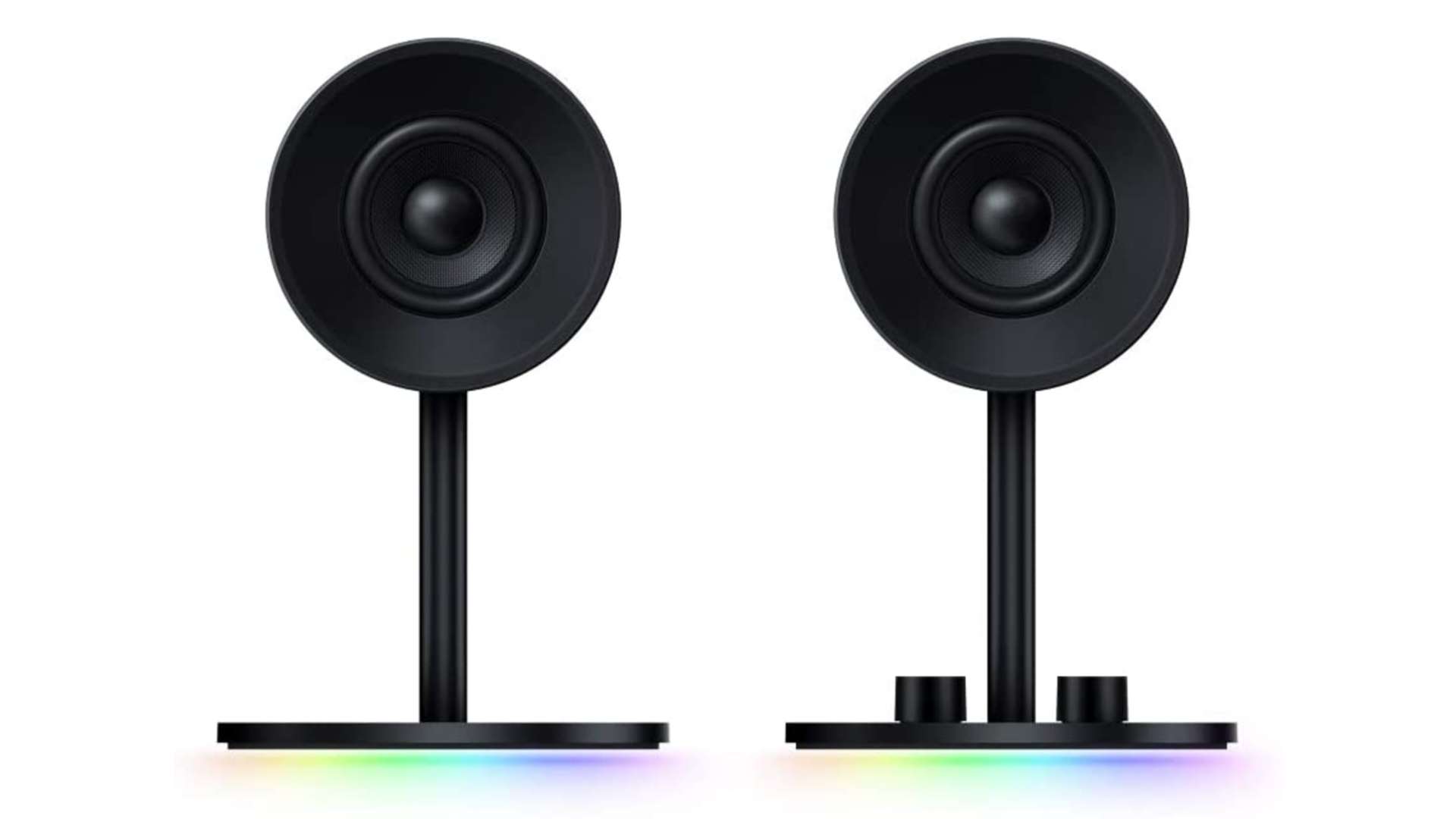 The best computer speakers for gaming are the Razer Nommo Chroma.

This good-looking set of 2.0 stereo speakers from Razer is a great choice if you’re looking for quality audio that’s been tuned specifically for gaming, with gunshots and footsteps in the midrange sounding clear as day.

The speakers have one of the smallest footprints on this guide, and the lack of a large subwoofer can also help if you’re trying to manage cables in your setup. Despite that, the bass is still there when listening to music. Of course, Chroma RGB lighting completes the look, synchronising with the Razer’s best gaming keyboard, best gaming mouse, and even select RGB LED lighting kits from Nanoleaf. If you’re not a fan of your gaming setup being lit up like a Christmas tree or simply want to save a bit of money, Razer also does a non-Chroma version. 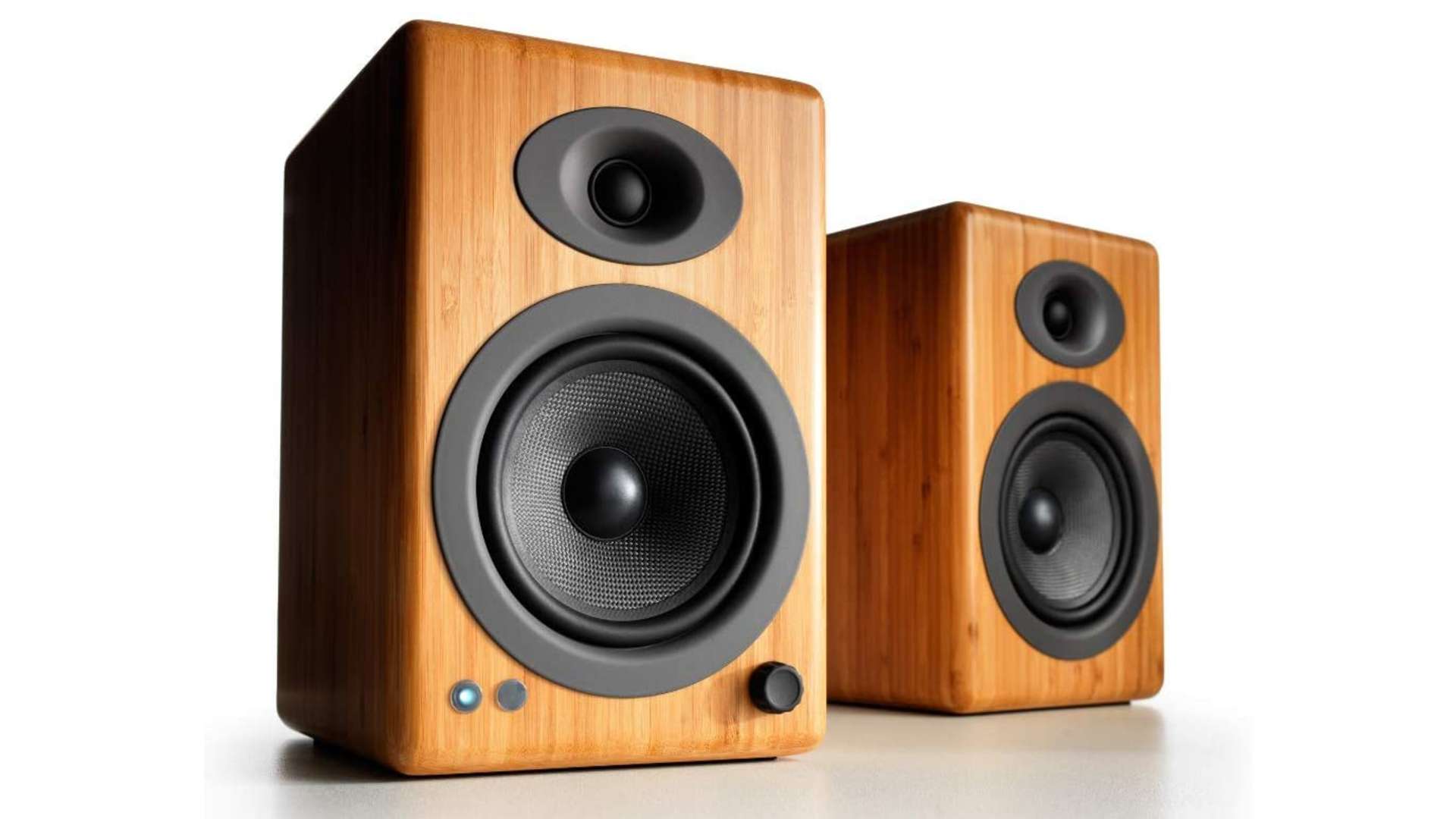 The best computer speakers for audiophiles are the Audioengine A5+ Wireless.

These are the best sounding computer speakers on this list, with its two 50W bookshelf speakers and a built-in 24-bit DAC letting you listen to music how it was supposed to be heard. They’ve also got wireless connectivity, so even if you’re away from your PC you can still fill your room with music by connecting your phone via Bluetooth. Sound quality stays top-tier over Bluetooth, too, thanks to Qualcomm’s aptX HD codec, which allows 24-bit audio streaming.

The satellite speakers provide superb bass themselves, but if you’re looking for more of a kick, there’s the option to hook your own subwoofer up, too. Colour-wise, you can choose from white, black, or a snazzy bamboo effect. 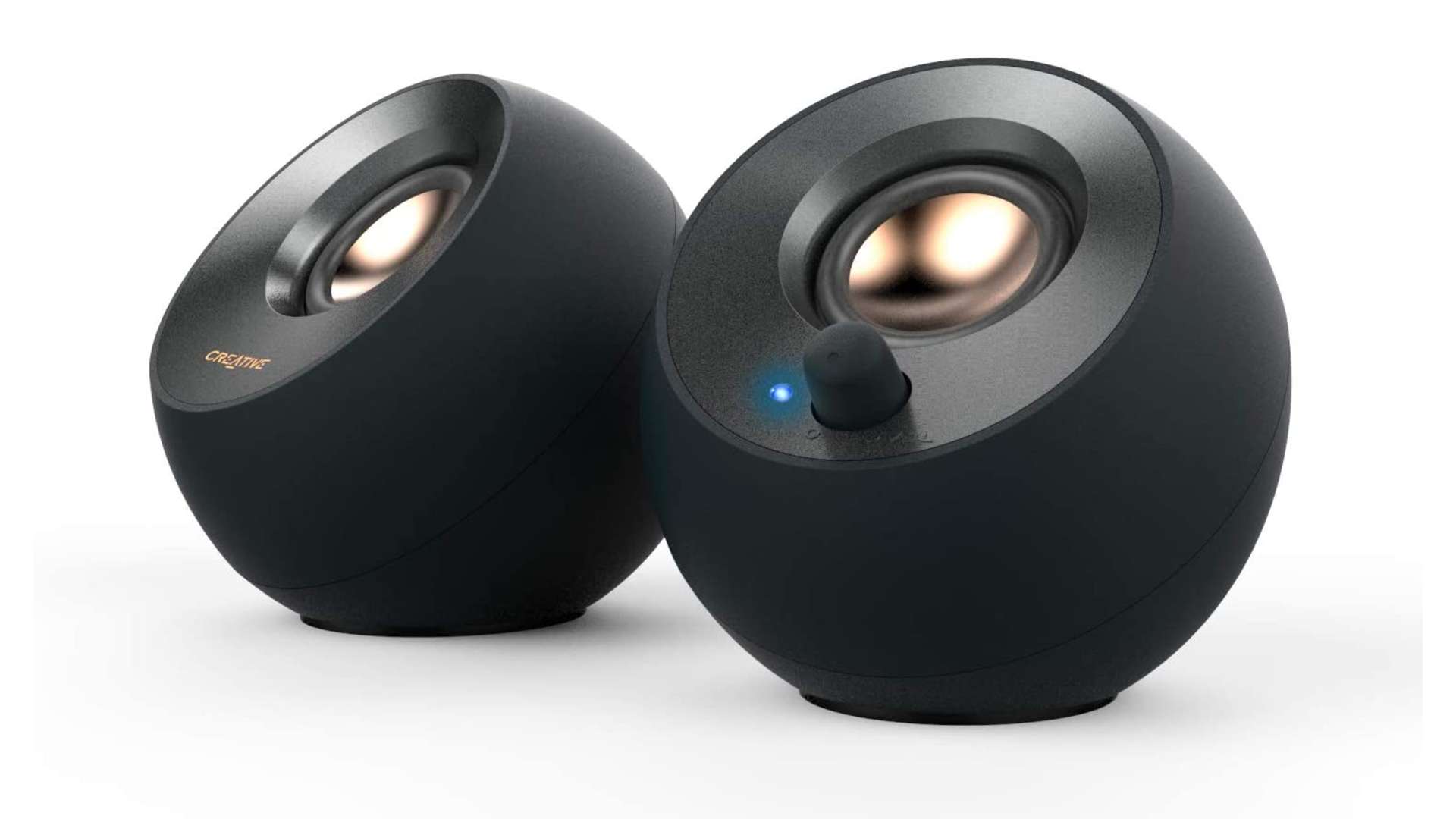 The best budget PC speakers are the Creative Pebble V2.

Looking for a cheap set of PC speakers that’ll still be a massive improvement over built-in monitor speakers? Creative’s Pebble V2 speakers are the best choice. Despite being the cheapest option, they’re pretty stylish stereo speakers that look right at home when sharing the same setup as the best gaming PC.

Powered through your PC’s USB port and connecting via a 3.5mm jack, these can still push out 16W of power, so they can get more than loud enough for a small room. Don’t expect audio that’s going to take your breath away, but for a cheap option Creative’s Pebble V2 offers great quality for its size. And if you fancy spending a little extra, the V3 model even packs Bluetooth. 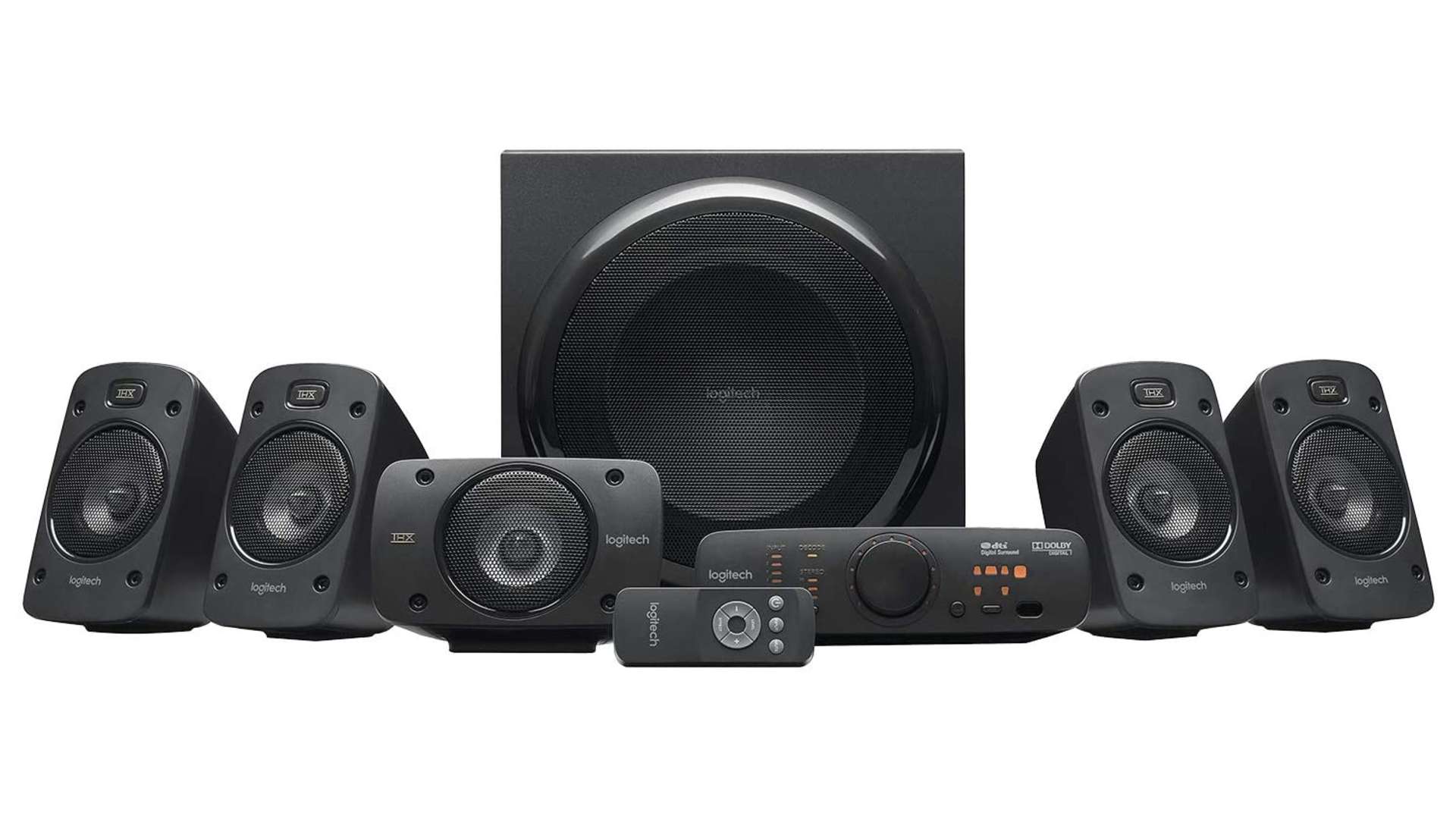 The best surround sound speakers are the Logitech Z906.

If you want a fully-fledged surround sound system, then Logitech’s 5.1 set should be on your radar, although you might want to make sure you have the space before adding it to your cart. If you can house it, you’ll get an impressive peak power of 1,000W across one large subwoofer with thunderous bass and five satellite speakers.

With THX certification, it’s also a great set of speakers for movie watching, bringing cinema-quality sound into your home. Plus, you can take advantage of that 5.1 surround sound in many of the best PC games. The ability to switch between multiple inputs means you can easily change  between your PC, phone, or console. For even more versatility, you can add Logitech’s Bluetooth adapter to play sound through the system wirelessly. 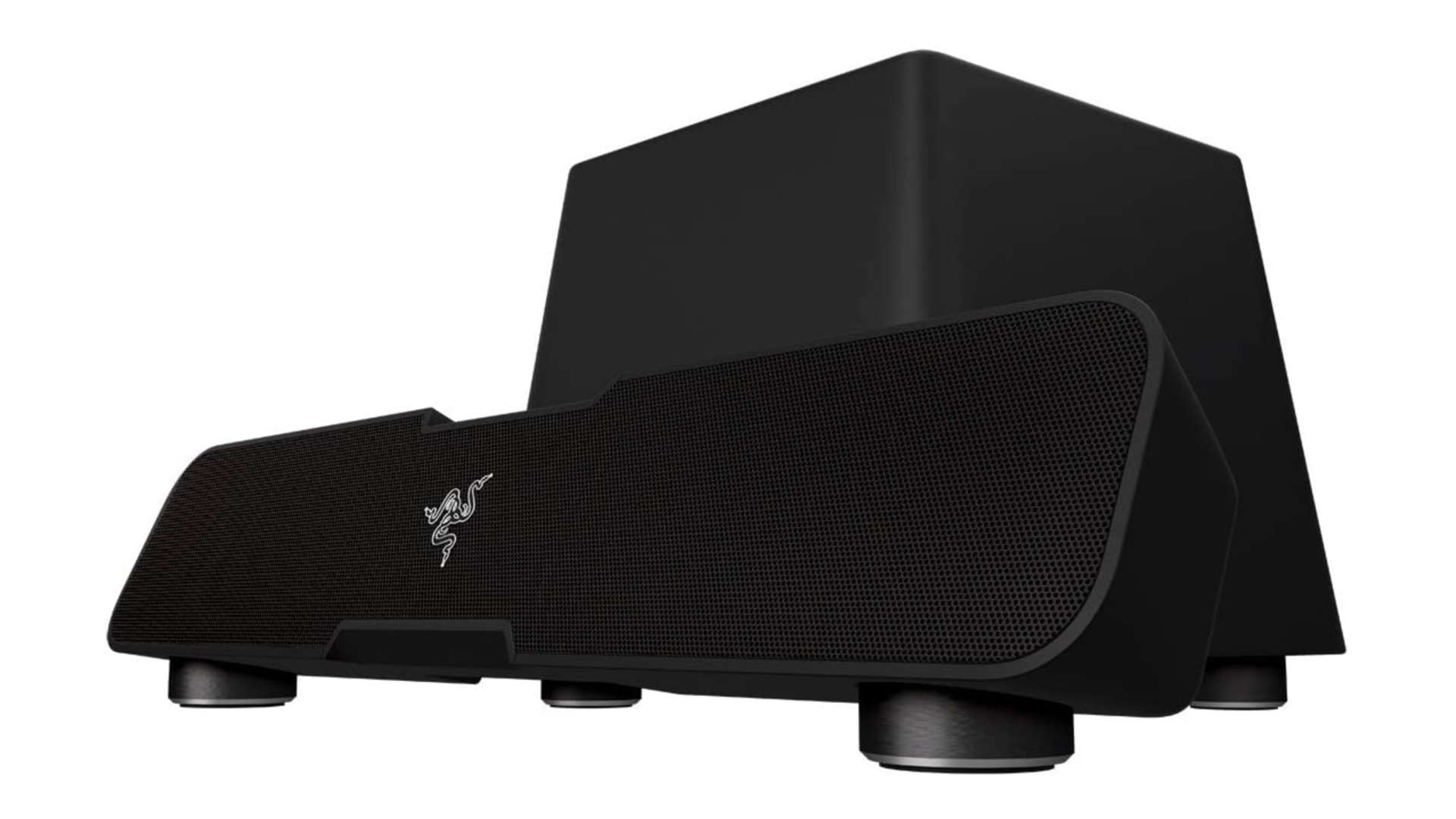 The best soundbar is the Razer Leviathan.

If you’re struggling for desk space with a multi-monitor setup and a full-sized keyboard, you might not have space for satellite speakers. The great thing about Razer’s Leviathan soundbar, however, is that it slots right underneath your display while the subwoofer is hidden away under your desk. It contains two 2.5-inch drivers for clear mids and highs, plus a dedicated 30W subwoofer providing the low-end bass, giving the whole system a combined peak power of 60W.

You’ve also got the option to connect via Bluetooth, so you can easily kick back with music even when you’re not on your PC. 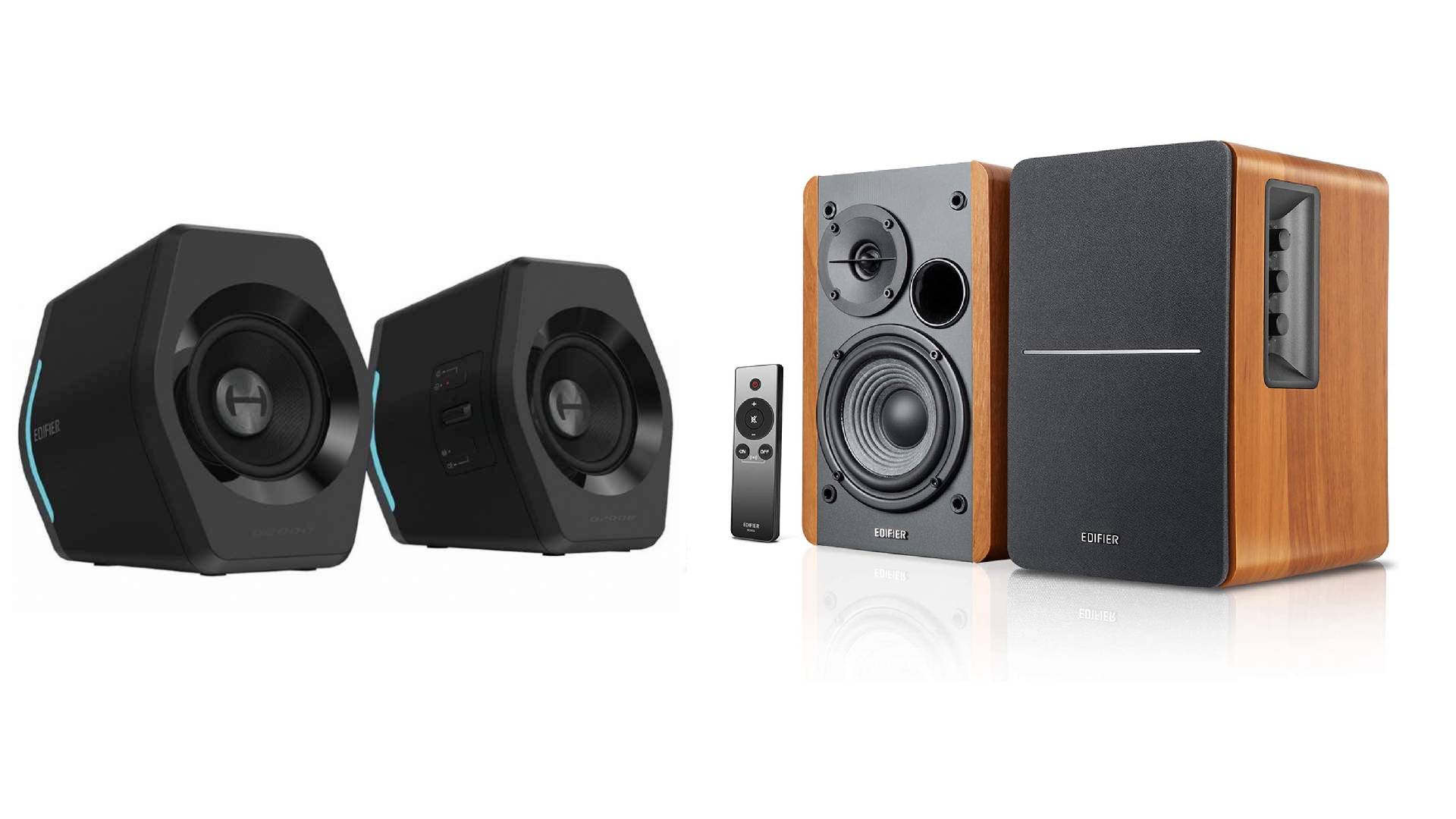 If you don’t want to wait for Black Friday deals, we’ve found two eye-catching deals in the meantime: one for US residents and the other for the folks in the UK.

In the US, Edifier’s G2000 model has a 9% discount, bringing the price down to $99. These stereo speakers have 32W of peak power, so can be cranked up to a decent volume despite their compact footprint. There’s also built-in RGB lighting, and the option to connect via a 3.5mm jack or Bluetooth to easily pair with devices other than your PC.

Over on Amazon UK, Edifier’s R1280T bookshelf speakers also have 9% off, bringing them down to £99.99. These stylish woodgrain speakers feature 45 watts of power, a port for connecting an additional sub-woofer, and a handy remote that should help you wield control over your gaming PC sounds from afar.

Why should I use computer speakers?

PC gaming is admittedly a solitary hobby, at least when it comes to there being more than one person at a desk. However, there are times when using a pair of speakers for audio makes sense, especially if you invite a friend round to your gaming room. For starters, using multiple headsets can be cumbersome, as you’ll need a free USB or aux connection, and wired headsets result in an abundance of cables.

If you’re planning on playing Game of the year winner It Takes Two, you’ll also want to avoid using headsets, as the game relies on constant communication. Sure, this is still possible using a headset, but if you’re sitting right next to each other, features like noise cancellation could become a problem.

which size speakers should I go for?

When choosing the best gaming speakers for your PC, there are a number of considerations to make, the first of which is size. If you place a subwoofer under the best gaming desk, for example, it could eat into valuable leg space, in which case Razer’s Nommo speakers would be ideal. If you’ve got little space left on your desk for a set of satellite speakers, then the Razer Leviathan soundbar could slot under your monitor nicely. But if space isn’t an issue, then you could kit your room out cinema-style with Logitech’s Z906 5.1 system.

is surround sound worth it?

Splashing out on a surround system really depends on your usage of the speakers. If you’re going to be watching movies on your PC and want the most immersive experience, a 5.1 or 7.1 system will greatly increase that. There are also surround sound-compatible games, such as Deathloop, Cyberpunk 2077 and GTA 5.

On the other hand, if you’re primarily using your speakers for listening to music before switching to your favourite headset, then a simple stereo setup is all you need.

how much do i need to spend?

When it comes to price, even the cheapest option on this list, the Creative Pebble V2s, are still a big step over the quality of any built-in speakers your monitor might have.

On the other end of the spectrum, if you’re looking for true audiophile-grade sound, the more expensive Audioengine A5+ Wireless is the best option, whether you’re gaming or jamming to music.

The best all-round system is the Logitech Z623, which is a little more expensive than the budget options, but a worthwhile investment for the THX-certified sound quality on offer.