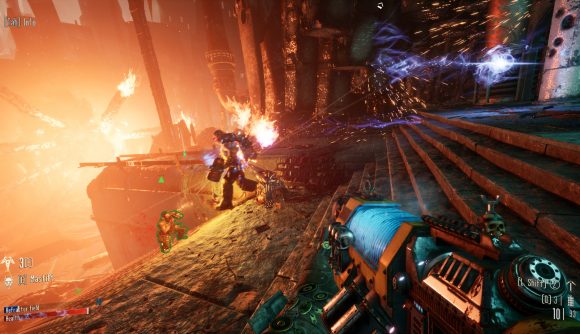 A first patch has arrived for Warhammer 40K FPS game Necromunda: Hired Gun. Coming just about a week after the game’s launch, this patch makes a few much-needed improvements, although some of the bigger issues will need some more time for the developers to address.

One significant issue addressed in this first patch is an incorrect offset that occurs randomly in aiming alignment, which translates to gunsights being off a bit. Hired Gun is, of course, a first-person shooter, so having sights line up properly is pretty important (although the auto-aim is remarkably forgiving, particularly while you’re wall-running). If you’re playing Hired Gun with a controller, there’s been a rework of aim assist while switching to iron sights, which should be a welcome fix as well.

Several audio issues have also been addressed, including some weird voiceover mixing and a problem with missing sound effects while in levels. That means you’ll be able to hear every syllable of Space Cockney as you’re bursting merc skulls in the Underhive. Pleasant!

“This is only a first step and we continue to work on various topics, including the stutters that some of you encounter,” developer Streum On Studio says in the Steam update, where you can also read the full patch notes.

While we weren’t enormously impressed in our Necromunda: Hired Gun review, awarding it a 6/10, there’s certainly fun to be had with its punchy gunplay and high-speed, acrobatic traversal systems.