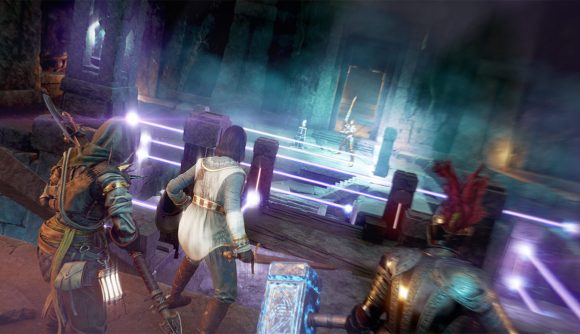 Amazon Games’ New World has been having a rough time, economically speaking. Players have discovered several ways to duplicate gold, and the developers have even gone so far as to shut the MMORPG’s economy down at least twice. Now it seems a plan to compensate players for lost gold has resulted in huge, unexplained sums showing up in their accounts, and the studio has switched New World’s EU servers into maintenance mode while it gets to the bottom of the issue.

Earlier today, a post in the New World forums claimed that more than 300,000 gold had been added to a player’s game account. While other forum users initially dismissed the post as casual trolling, other players reported members of their companies also receiving huge lump sums of gold, between 100,000 and 300,000 apiece.

Pneuma, a New World community moderator, replied to the original post, simply saying “Congratulations!” Shortly after that, community manager Tosch posted an announcement that the EU Central Region worlds had been put into maintenance mode as the dev team investigated “the currently ongoing coin compensation for players”.

About two hours later, Tosch posted an update, confirming that players had been receiving incorrect amounts of coin compensation. They said the developers are currently working on a rollback to correct the problem, which appears to be affecting the EU Central region, but that there is currently no estimated time for the deployment of the fix.

After the weeks of gold duplication glitches and other financial weirdness in New World, it may take some time before the game’s economy settles down into something normal.