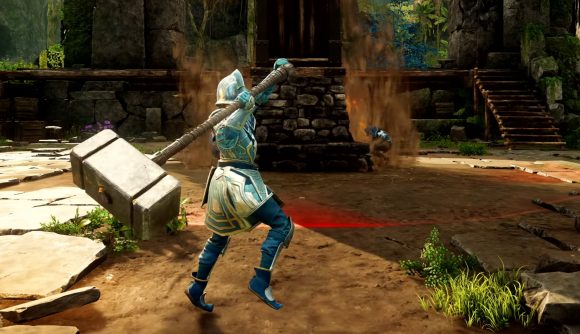 Hot on the heels of an invincibility bug addressed in New World’s latest patch, there’s a new issue causing problems on the new MMORPG’s servers. Since the rollout of the patch, which finally introduced New World’s server transfer functionality, players have discovered a rather generous bug that allows certain characters to duplicate vast sums of gold – but Amazon says players who abuse the exploit may face bans.

A “small number” of players encountered an error called Character_Persist_Failure shortly after transferring a character to a new server once patch 1.0.3 had arrived. Players who experienced this found that if they then sent gold to another character who hadn’t gotten that error, and then logged out, the gold transfer would only be saved for the character on the receiving end of the transaction – the player who’d sent the gold would log back in with the entire amount in their inventory.

Amazon Games says it’s “corrected” the issue with characters being improperly saved, and has warned players that anyone found to have exploited the bug may face a ban, and the money or items obtained using it will be removed from the game. But the issue persisted for long enough that it may be difficult to determine where to draw the line.

Players on popular servers have reported instances of faction members sending the maximum amounts of gold possible to their rivals in the hope of getting enemies’ characters banned when Amazon inevitably enforced its anti-exploit policy. Others have suggested that market prices for common items have shot up in apparent attempts to launder the ill-gotten funds.

Please read this notice regarding suspension of server transfers.https://t.co/iTRIdNObY5

For now, character transfers between servers has been put back on hold.

“We have paused character transfers and [are evaluating] how we can prevent future occurrences of this problem,” community manager TrevzorFTW writes on the New World forums. “When that is resolved we’ll resume the service, with an announcement ahead of time.”