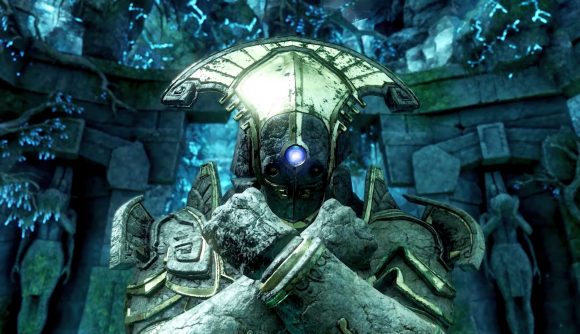 New World, is turns out, is very popular. Amazon Games’ fantasy MMORPG launched earlier this week and immediately saw budding adventures diving into Aeternum in their hundreds of thousands, with peaks of over 750k concurrent players – numbers that put it comfortably among Steam’s most-played right now. Naturally, that’s meant some pretty hefty queues for some players as servers have struggled to keep up, and the devs announced a server transfer opportunity was coming up to help ease congestion soon. Now, it seems that’s due to arrive next week.

In a Twitter post updating players on this topic (below), the New World devs announce that they’ve been “working around the clock to add as many servers as we can and will continue to do so until we stabilise wait times”. So far, they’ve “more than doubled” the number of New World servers and are working to dial up capacity on all available worlds get a higher population cap in place.

While these efforts are pushing on, the devs encourage new players diving in for the first time to go for one of the 40% of servers with “low or no wait times”. While you might be keen to get stuck in with your friends, the New World devs explain that they’re “working hard on a feature that will allow you to transfer your characters to a different server”, with their goal being to “release this feature next week”.

So, if you’re keen to just get playing, you can get started in one of the low-population servers now and then switch over later on to join your pals in another. The devs say that their goal is to launch the feature next week, but do explain that they want to test it thoroughly to make sure it’s ready before rolling it out.

A message from the New World Team regarding launch, world queues, and character transfers. pic.twitter.com/wDSrlT8w93

Before that happens, the New World team will also share details about how the transfer system works, so you’ll know how to do it ahead of time. They add that this feature is at the top of the team’s priority list right now as they appreciate how important it is for players to be able to play with their pals. There’s no word on exactly when this feature will be rolled out next week, but it looks like we can expect it in the coming days.

For now, be sure to check out our New World factions, New World best weapons, and New World leveling guides for some tips to help get you started.