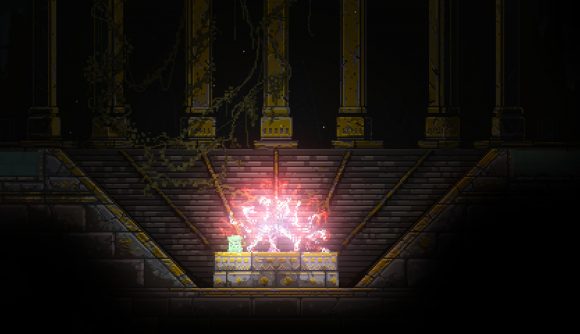 It seems like only yesterday that Noita, the roguelike game about being a wizard who collects increasingly chaotic magic wands in a world where every pixel is a simulated material, was leaving Early Access. As it happens, that was last October, and now the challenging wizard sim has gotten its final major update. Epilogue may be the last big addition to Noita, but it’s packed with new gear and stuff to do.

“While this is the last major update for Noita, it’s not going to be the End of Everything,” developer Nolla Games writes in the update post on Steam. “We’ll still keep an eye out for bugs and try to patch them. There is also a thriving modding scene, which is producing amazing mods for the game.” It’s true – you can browse a huge number of player-created Noita mods on its Steam Workshop page, in fact.

For its part, Nolla’s parting shot for Noita is a huge list of new spells, items, materials, creatures, perks, and more – plus a welcome round of fixes and adjustments to make your next expedition into the mines a tad smoother (at least until you set yourself on fire and fall into a pool of oil).

There are two new minibosses in the update, twelve new enemies listed, plus “a couple other new enemies,” new perks like Cordyceps and Rage-fueled Leviathan, a new item that makes “looking for secrets easier,” and – happily – a tonne of new secrets, which have all been redacted in the patch notes.

There are four new hidden areas, plenty of new structures, three new biome modifiers, and a patina of rust for the Vault biome.

The Epilogue patch also adds some new stream integrations, so if you’re playing on Twitch, your viewers have new options. They can now trigger new stream events like ‘always cast’ and ‘enemy contact damage’ to make your life easier, or harder, but definitely more chaotic as they see fit.

The patch also includes a host of bug fixes, new modding options, and documentation for modding – so Noita is likely to have a long and lively life well after official development has ceased.