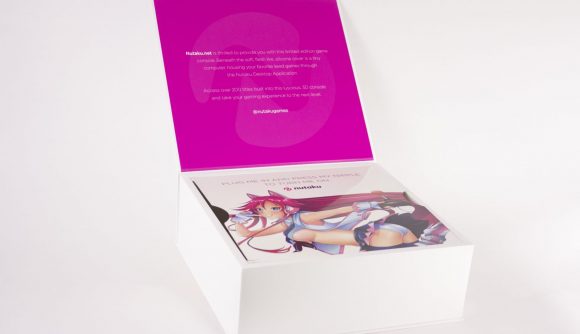 Following the launch of its very own desktop client last year, adult game portal Nutaku is looking to establish itself even further, with the arrival of its very own game console. Simply named ‘The Console’, it comes with a “pre-installed library of free-to-play and premium adult titles.” Oh, and it’s shaped like a boob.

The console, which only showed up for the first time this week, is described as “the ultimate adult video gaming experience,” and is intended to celebrate the adult site’s fourth year of operating (and presumably its meteoric rise to one of the most popular websites in the world).

The Console will set you back $170 (£130), but that doesn’t seem to have put anybody off. At time of writing, it would seem that it’s already sold out, although Nutaku says on its SFW store page that it’s hoping to restock.

The site has been expanding an awful lot over the past few years, with – somehow – an esports scene and the recent addition of a dedicated LGBTQ+ section. And now that they’re expanding into the console market, I’m sure Sony, Nintendo, and Microsoft are all quaking in their boots.

Related: Here are the best sex games on PC

Some of the platform’s success might come down to Valve’s relative prudishness. While Nutaku is churning out new games on a regular basis, Steam hasn’t proved a particularly happy home for developers of NSFW games, who must be happy to now have a much more reliable outlet for their work.