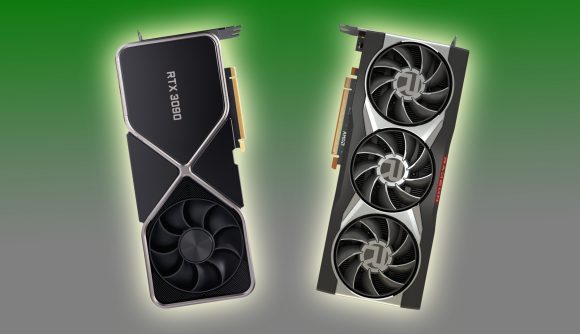 AMD and Nvidia GPU prices have taken yet another step towards normality, as the best graphics card costs now average 10% above MSRP in Germany. According to figures published by 3DCentre, you can now grab the RTX 3090 and Radeon 6900XT for less. However, the stat site caveats that while we’re seeing the “lowest average price reductions of recent times,” the imminent arrival of RDNA 3 and RTX 4000 cards means we should actually be paying even less.

3DCentre’s data shows that Nvidia GPU prices now average 14% over MSRP, while AMD fans only have to fork out 6% more for an RX 6000 series graphics card. It’s worth mentioning that there are some exceptions, as the likes of the Radeon RX 6800 will still set you back 35% more.

The German GPU price trends paired with increased availability are a promising sign, especially if you’re eagerly waiting to upgrade your gaming PC. Yet, 3DCentre says GPUs should be going for 10-20% below MSRP, as current-gen contenders are about to be replaced by next-gen graphics cards like the RTX 4090 and Radeon RX 7900 XT.

The graphics card market can be unpredictable, but GPU prices will hopefully continue to fall over the coming months. After all, the fact that the RTX 4060 boasts ray tracing performance comparable to an RTX 3090 means even entry-level enthusiasts are better off waiting for the next generation of graphics tech. Whether or not pricing will remain normal once new options arrive remains to be seen, safeguards like Nvidia’s $10 billion TSMC investment should help alleviate the effects of ongoing component shortages.