The Red Dead Redemption 2 recommended specs might seem pretty reasonable, but as pretty as it is, it’s a helluva graphically punishing game. If you just want to get 60fps at 1440p on ‘High’ settings then you’re going to need a $500 graphics card, such as the Nvidia RTX 2070 Super or an AMD RX 5700 XT. If you were waiting for a reason to upgrade RDR2 might just be it… yes a game that was actually released over a year ago is the best reason to upgrade your PC. Jeez, that’s depressing.

Nvidia has just released the new Game Ready Driver for Red Dead Redemption 2 and has also published a short piece about RDR2 PC performance, and the bad news is that if you’re chasing 60fps then you’re going to need a powerful graphics card to get there without sacrificing the settings.

Hell, there isn’t a consumer GPU alive that can run Red Dead Redemption 2 on max settings at 4K and still hit 60fps. Nvidia even had to tune down the settings to hit that mark with an RTX 2080 Ti at the recent preview event we attended. And that’s a $1,200 graphics card.

And High isn’t even the pinnacle of RDR2’s graphics settings. The Nvidia piece explains about the 40 different settings you can use “to customize visuals and performance, enabling you to ramp up graphics to ludicrous Ultra levels, and to turn high-impact settings down a notch to achieve a playable framerate.”

So yeah, there are Ultra settings, and if it follows GTA V there might even be Very High settings to play around with too. Which means even with an RTX 2080 Ti you’ll be sitting in the middle order of GPU settings, wishing there was a GeForce RTX 3000-series card available to let you run it looking real purty… 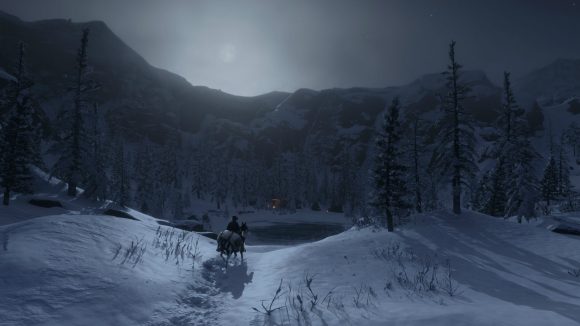 “At 3840×2160,” reads the article, “only the GeForce RTX 2080 Ti can deliver a high-fidelity 60 FPS experience, giving gamers a stunning level of cinematic detail in Red Dead Redemption 2’s wilderness, and in Saint Denis, the game’s vibrant city. To hit this mark, we tuned settings to a mix of Medium and High, as used at a recent PC version press event.”

It does go on to suggest that if you really want to run on High at 4K with your super-expensive graphics card then you should consider using the GPU upscaling and sharpening it introduced alongside the recent GTX 1660 Super release.

Given the graphics card bending performance of RDR2 it’s probably a good job that Nvidia and Rockstar didn’t add ray tracing into the mix. I don’t think 2019’s PC could handle it…