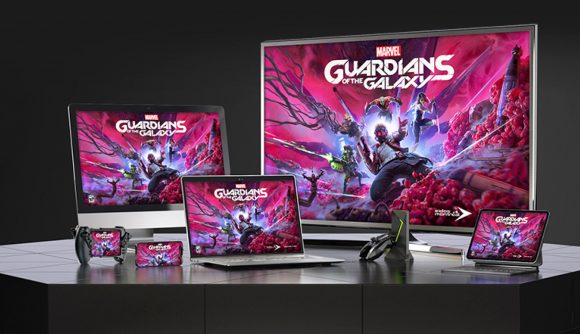 So far, Square Enix is holding its cards close to its chest with Marvel’s Guardians of the Galaxy system requirements, so we can only speculate how taxing it’s going to be for your gaming PC. We’re hopeful that the barrier to entry won’t be too high, considering the game also runs on the Nintendo Switch, but if you feel you might need an upgrade to use all its PC-exclusive tech, Nvidia has you covered by bundling the game with qualifying RTX 3000 desktops and laptops.

It’s unlikely you’ll be able to make use of Guardians of the Galaxy’s support for 8K resolution – and if you can, hats off to you and your gaming monitor – but stepping into Star-Lord’s shoes and leading a ragtag band of misfits will look that much better with ray tracing and Nvidia DLSS switched on. For that, you’ll need an Nvidia RTX graphics card, which is pretty hard to come by during the ongoing GPU shortage if you don’t already pack one.

Should you decide a new prebuilt gaming PC is in order or you fancy taking things on-the-go with a gaming laptop, you can net yourself Guardians of the Galaxy for free in the process. All you need to do is make sure you choose anything packing an entry-level RTX 3060 to enthusiast RTX 3090 and buy from a participating retailer.

Since Guardians of the Galaxy won’t have DLC or microtransactions, the code Nvidia provides doesn’t net you anything special, like pre-order bonuses. That said, you will be able to play the game on day one when it releases on October 26, with all the bells and whistles.