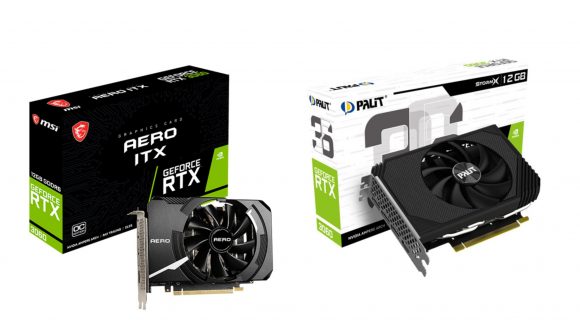 If you were looking to put together the best mini gaming PC, your choice of graphics cards has been pretty restricted so far, having been limited to small form factor, last generation Turing and RX 5000 cards. Fortunately, this is set to change with multiple manufacturers revealing their tiny mini-ITX versions of the recently-revealed RTX 3060 – these will be one of the best graphics cards you can fit into a mini-ITX PC build right now, letting you run all the latest titles flawlessly.

It’s just the standard RTX 3060 we’re seeing available as a Mini-ITX GPU so far, but if the last generation is anything to go by, we should see pint-sized versions of other Ampere GPUs in the near future.

MSI announced its single-fan design ‘Aero ITX’ RTX 3060, which will be available in a factory-overclocked or stock flavour. Palit’s similarly looking ‘StormX’, just 17cm in length, was also announced in a press release for its new RTX 3060 cards. No RGB here, but windowless designs are more common in the most compact PC cases because it can be difficult to manage cables neatly, meaning these graphics cards will be hidden from sight anyway.

Make sure you don’t pick up a mini-ITX card if your case doesn’t need one, though, as a smaller heatsink means higher temperatures, making it harder to overclock your GPU in the future.

While you can pack the best gaming CPU in without issue, the same applies to the best CPU cooler – if you can fit a larger one that can funnel more air to cool one of the most important components in your gaming PC, you should.