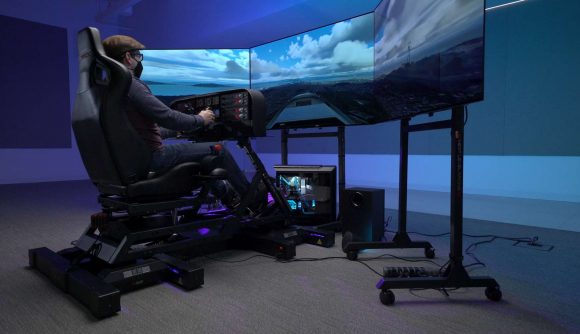 While Microsoft Flight Simulator is a great sim experience even if you’re just using a single monitor and the best PC controller, Nvidia‘s taking it a step further. Its rig shows off the potential of the RTX 3080 with a triple-screen setup covering 195 inches of screen space, a twisting and vibrating seat, plus all the buttons and levers you’d find in a real aircraft. Want to build something similar? No problem, just make sure you’ve got a small fortune saved, and lots of spare space.

Nvidia went for the best gaming PC build possible to power the whole setup. It consists of an i9-10900K, the best gaming CPU, alongside a custom water cooled RTX 3080. This is paired with 32GB of RAM, far exceeding the hefty system requirements for the game.

Nvidia didn’t just opt for the best gaming monitor either. Nope, that’s actually three 65-inch LG OLED 4K TVs you can see, costing a total of around $6,000. While the RTX 3080 is an impressive card, there’s no way it could run the game at native 4K on each screen – the resolution was reduced to a more achievable 5760 x 1080 split across the three panels.

The cockpit is stuffed with all of Logitech’s flight accessories, along with a $11,000 motion system so virtual pilots can feel all the tilts and vibrations of a real plane. It’s probably the closest thing you can get to real flight, other than this $13m simulator. 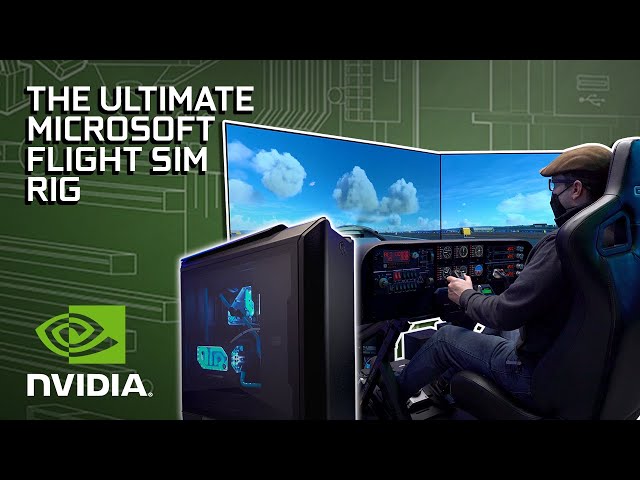 It’s a more versatile setup than it seems too – you could quite easily swap out the flight instruments for a wheel and have another motion rig for playing the best racing games. But, at nearly $20,000 all in, we’ll give it a miss next time we boot up one of the best simulation games on PC.