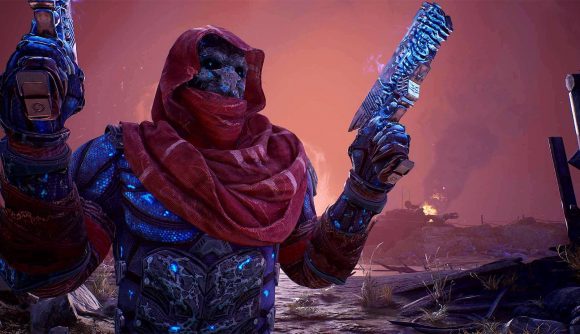 The loot grind in Outriders is about to get a bit easier. Developer People Can Fly says the co-op game will be getting an update in the near future that doubles the rate of legendary item drops and reworks the way Outriders handles duplicate legendaries.

In the next Outriders patch, People Can Fly says the legendary drop rate will be “increased by 100%,” meaning you’ll be getting legendary items twice as often once the next update rolls out. There are additional changes, too – for instance, the developer says it’s dropping the level brackets on legendary items, which means that when the update arrives, all legendaries will be able to drop at any level. Certain items, People Can Fly explains in the Reddit post, currently will only drop once you’ve achieved a certain level threshold, and that’s getting removed.

Since legendary drops are currently pretty rare in Outriders, it’s heartbreaking to discover that one that does finally drop is something you’ve already picked up. People Can Fly says it’s going to be implementing a new anti-duplication system in the new patch. With this new anti-dupe system in place, any legendary items that you already have in your inventory or stash will be re-rolled once when it drops. If you’ve already got that second item, well, you’re getting a duplicate.

However, that does give you an extra shot at getting something new, which is an improvement over the current situation and should drastically reduce the number of duplicate Outriders legendary items players see.

This Thursday brings with it Dev-news regarding:

Another significant change coming to Outriders in the next patch is a rework of the luck system. People Can Fly says you’ll still want to farm gear at the highest world tier you can manage, but you should no longer go for long periods without any legendary drops whatsoever once the new patch arrives.