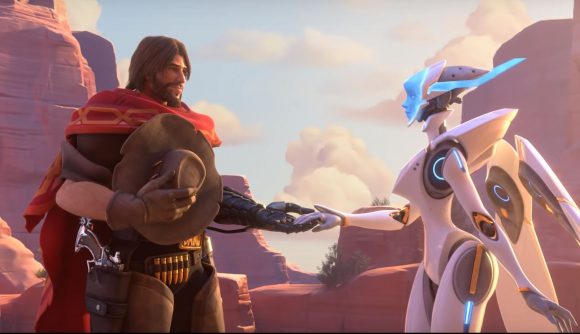 Overwatch’s latest cinematic short, Reunion, introduced us to the new gunslinging hero Ashe, the latest addition to the game’s growing roster. But Overwatch’s developers say they have six more heroes in the pipeline – and one may have appeared alongside Ashe in the latest video.

Reunion is a face off between Ashe and McCree over the spoils of a train robbery. While it’s clear McCree has an established (and at times, adversarial) relationship with Ashe, what he’s after is one specific piece of the train’s cargo: a high-tech crate that contains an ethereal omnic being known as Echo.

“Welcome back, partner,” McCree tells her when she emerges.

Overwatch lead designer Geoff Goodman tells us that the team has six new heroes planned at present, and there are teases for at least a couple of them in the latest cinematic.

While talking about working out the design kinks with Ashe and her omnic sidekick B.O.B., Goodman said that if B.O.B. hadn’t worked out as Ashe’s ultimate ability, the team had several fallback concepts to use.

“Obviously you saw Echo at the end of Reunion, and people still want Junker Queen, so we just have a lot of cool ideas out there,” Goodman said. “So we probably would just jump on something else [if the Ashe concept hadn’t worked].”


There’s no way to foresee what kinds of weapons or skills Echo might bring to Overwatch, because we see precious little of her in Reunion. She levitates, wears advanced armor, and seems to be a kind of ethereal AI being inhabiting a kind of vaguely Protoss-style robotic form.

For now though, we’ll content ourselves with getting to know the white-haired outlaw Ashe.