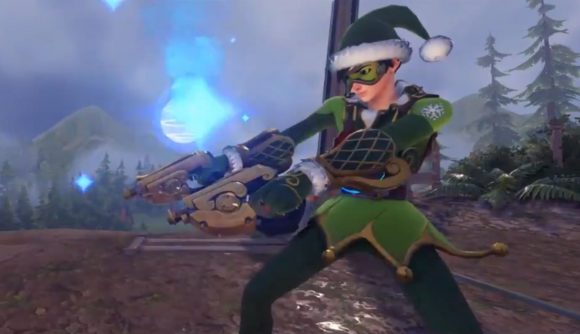 We’re all PC gamers here, of course, but chances are you remember Navi, the chatty blue fairy from The Legend of Zelda: Ocarina of Time who taught you how to use the controls, helped you target enemies, and never, ever seemed to shut up for more than twenty seconds at a stretch. Now, thanks to the power of the Overwatch Workshop, she can accompany your heroes there, too.

Two redditors, who go by andygmb and Lymbow, created the code in the Overwatch Workshop to add Navi to Overwatch. They also created a pretty adorable video to go along with it, which you can watch below. As a stand-in for Link, Jingle Tracer works pretty well. Navi suggests using the Blink ability to avoid enemies, and cautions Tracer-Link to be careful because there are ‘pigmen’ lurking ahead.

This would be Roadhog, who immediately hits Tracer with a hook and treats her to a face full of junk shot. Oh well, Navi, at least you tried. Sometimes people just won’t, you know, listen.

Myself and Lym made Navi from @Nintendo's Zelda in the workshop! @PlayOverwatch I love the creative stuff we can do! Please add more effects! pic.twitter.com/2oMxsLgjkF

If you want to try the code out yourself, use 6WXRW, then press ‘F’ to interact with Navi. Bear in mind, Andy warns that it’s only been tested with one player, and that glitches are highly likely when more players are present.

Still, it’s a neat demonstration of what the Overwatch Workshop is capable of. The title cards, text, and custom sounds you see in the video were added after the fact, since so far that’s not possible in the Workshop. But there’s still plenty to do in there, and we’re having a blast seeing what the player community comes up with.