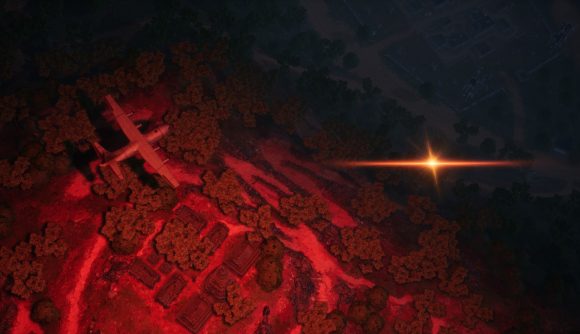 The new Challenger Battle Royale mode in PlayerUnknown’s Battlegrounds‘ Labs harkens back to the early days of PUBG, when the game felt almost as much like a horror game as a run-and-gun battle royale. The new mode reduces the number of UI elements you have to rely on and drops you into Sanhok at dusk, with only the light of signal flares to use to identify the safe zone.

The new Challenger Mode is live now, and it’s for solos only. When you drop in, you’ll see that you no longer have a compass, mini-map, kill feed, or alive player count – you’ve got to rely solely on what you can see with your eyes in the diminishing twilight. You’ll want to watch your back – all weapon damage is doubled, and that includes melee weapons, firearms, and throwables.

While the blue zone moves at the same speed as usual and does the same amount of damage to players caught in it, you’ll need to look for signal flares to figure out where the safe zone is. The ‘warning phase’ is indicated by a signal flare at the centre of the new safe zone. That’s followed by the ‘danger phase,’ which is signalled by three flare sounds and an illumination flare that lights up the area you’ll need to rush towards. That’s the sign that the blue zone has begun moving.

You can read all about the new labs mode over on Steam, and we’ve also got a handy list of the best battle royale games if you’re shopping around for something new. The Challenger Battle Royale Labs mode runs until March 15 at 11 a.m. PST / 2 p.m. EST / 7 p.m. GMT.