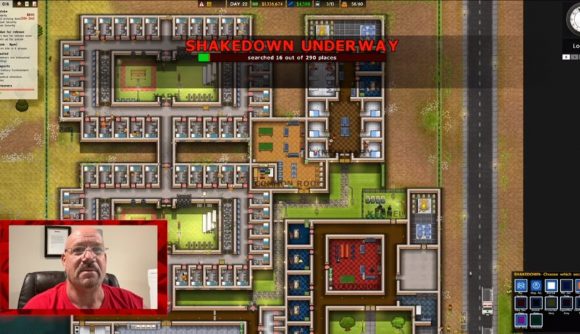 Larry Lawton is an ex-prison inmate with a popular YouTube channel where he talks about prison life, the legal system, and his career as jewel thief. On his channel, he does videos talking about the depiction of crime and prisons in popular media, and recently he turned his attention to management game Prison Architect.

In a video, Lawton plays the latest Prison Architect expansion, Prison Architect: Island Bound, which adds island compounds to the prison sim. While he plays, he rates the realism and shares stories of his time in jail, and generally Introversion Software’s simulation stacks up. In one anecdote, Larry says he put lots of phones in his prison because access to phones can be a bone of contention among inmates.

“I watched a man not give up the phone for another call during a holiday. It was Christmas-time and the guy was making a phone call home, and he’s supposed to give up the phone after his first call of 15 minutes,” Lawton says. “Another guy looked at him like ‘what are you doing?’, he left the line, he went back to his cell, got a shank, and stabbed that guy.”

Later, as he’s showing how Prison Architect simulates prison shakedowns, Lawton points out the contraband discovered in the game, like a phone, a lighter and a screwdriver, is on the conservative side. “In my unit, in Atlanta, the found six shanks, just in my unit. One time, they went through the whole unit and found 25 shanks,” He says. “These are items that can kill you, a screwdriver is a shank.”

We actually spoke to Lawton ourselves a few months ago about the jewel heist in Grand Theft Auto V. Prison Architect is currently reduced on Steam in the Steam summer sale.