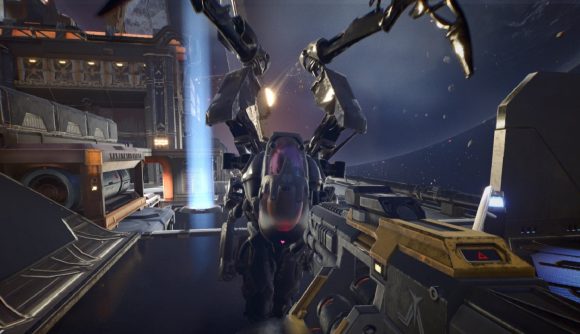 Project Nova, Eve Online developer CCP’s first-person co-op shooter, is effectively shutting down as the company goes “back to the drawing board” to reevaluate the game, according to a statement from the Project Nova team.

Project Nova was meant to be a robust spiritual successor to CCP’s Dust 541, and the company had brought in Nottingham-based Call of Duty veterans Sumo Digital to work on Nova’s gunplay and progression systems.

However, in the month since Eve Vegas, CCP says playtesting and community feedback has led it to believe that Project Nova isn’t holding up to the company’s expectations for the project.

“We see that the gameplay experience in its current form does not live up to our original vision and would not achieve our ambitious goals for this project,” the team wrote. “As a result, we will not be moving forward with the upcoming invite-only Alpha until further notice.”

While the note is only formally announcing the cancellation of the invite-only alpha which had been announced at Eve Vegas, the language could hardly be more dire.

“We hope you understand that we need to take a step back and return to the drawing board, where we will spend more time figuring out how all this hard work can translate into something better and more meaningful for the Eve Universe,” the team wrote.

Here’s the teaser trailer from October:

However, they’re not going to hurry.

“CCP is in no rush to release Project Nova until we’re satisfied it provides a rock-solid gameplay experience and visuals to match.”