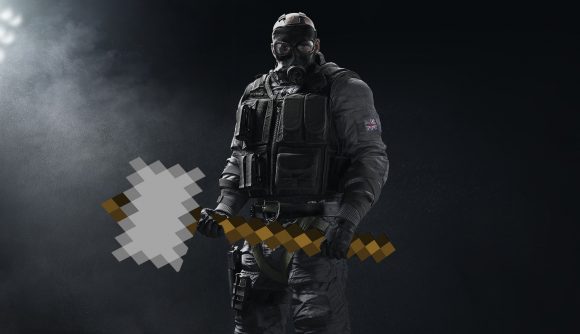 Rainbow Six Siege players have tackled zombies, outlaws in the Old West, and all the worst glitches known to mankind, but there’s one threat they’ve never faced – ending up in the wrong game entirely. Now, thanks to an excellent bit of animation from a talented player of both Siege and Minecraft, we might know what that’s like.

In the animation, poor operator Sledge busts down the wrong barricade and ends up in another dimension, one filled with Creepers, pigs, and maybe even your cat. While Minecraft players are used to weird dimensional shifts, it’s a whole new experience for this unfortunate operator.

The video was originally posted on Reddit by creator n0lberg, and so impressed the Rainbow Six Siege team it was tweeted out on the official @Rainbow6Game Twitter feed. As we write this it’s currently sitting at 60K views, 2.5K retweets and 8.7K Likes on Twitter alone – a lot more once we factor in the original Reddit post.

The video – which you can check out below – shows Sledge approaching a barricade in a normal Siege level, while watching out for hostiles. After breaking through, however, he finds himself in a Minecraft recreation of the level. It’s very smoothly done.

Sledge breaks through to a different dimension. 🔨🤔👀

The video gets even more impressive after that, as Sledge – still in the Minecraft world – drops a drone and explores with his phone, recreating the black and white rolling camera experience in Minecraft. He then also uses a grapple to climb up the wall of the building, smashes through a barricaded window, and returns to normal Siege. Very cool.

While Minecraft is well-known as the go-to game to find creative minds, it’s rare for one of them to create a crossover as perfectly tuned as this video. Kudos, n0lberg! Have him end up in Half-Life next, please?