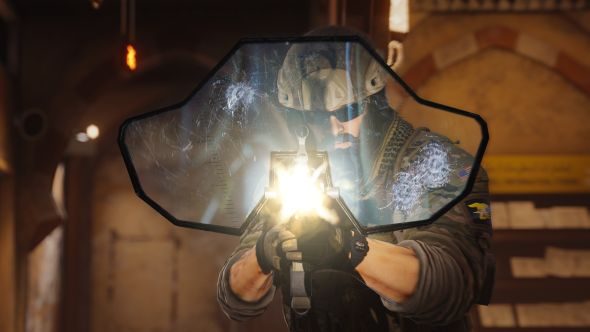 After a rocky launch and poor sales just two years ago, Ubisoft have managed to turn around the fortunes of Rainbow Six Siege in a big way. That’s been the story throughout the past year, and the game’s success is only continuing to grow.

Here are the Rainbow Six Siege operators you should be playing.

Ubisoft announced that the game has now surpassed 25 million registered players, split across PC and consoles. It’s not clear how that number divides across platforms, or how many of those registered players come from free weekend promotions. For a rough bit of context, SteamSpy reports just over 3.6 million owners on the platform.

A somewhat more coherent story is told through Steam Charts data, which reports an average player count in the past 30 days as well over 45,000 – the highest monthly average in the game’s history. In fact, Siege has been increasing in player counts pretty steadily since launch. It only managed an average of 8,000 players in its release month of December 2015, and it wasn’t until midway through 2016 that the game managed to substantially increase its regular players. 2017 alone has seen Steam’s average monthly Siege players more than double from around 20,000 in January to the nearly 46,000 recorded in the past 30 days.

The game’s continued success shows a very strong argument for the ‘games as service’ model, with continued content updates and major fixes salvaging Siege from a lackluster launch to one of the most popular online games in the world. This announcement comes alongside the release of the latest such update, Operation White Noise, which adds another round of new content for the game.

Update August 4, 2017:People love shooting through walls, rappelling through windows, and driving around tiny cameras – Rainbow Six Siege has surpassed 20 million registered players. It’s coming up to the game’s second anniversary, but its unique take on the online shooter has proven it has legs.

Ubisoft say 2.3 million players log into the game every day now. This strong community has no doubt been retained in part thanks to Ubisoft’s brilliant post-release support, adding ten new operators, new maps, and a host of major quality of life improvements since its December 2015 launch.

“Our community is growing and so is our ambition to make Siege a shooter that is here to stay,” product director Nicolas Lefebvre says in the milestone announcement. “The next few weeks are very exciting as it marks the culmination of Operation Health and the release of our next season set in Hong Kong.”

Operation Health is a big update that aims to improve the core of the game, from hitboxes to matchmaking. And, as Lefebvre says, there’s also a Hong Kong expansion on the horizon.

Elsewhere, Ubisoft also revealed that Pulse will be the next operator to get an elite skin. Here’s a quick look:

I got some bad ideas in my head…

Original Story July 19, 2017: Ubisoft had their Q1 financial call last night (that’s Q2 calendar, Q3 in Australia, and Q93 by a Standard Galactic Year, date fans) and were pretty gosh-darn pleased with themselves. The highlight of a number of facts and figures released is that zero-gone-hero FPS Rainbow Six Siege is on track to hit 20 million registered users before the end of this month.

It’s a fairly massive achievement for a game that has done nothing but build an audience since launching to a lukewarm reaction in late 2015. On top of this soon-to-be-hit milestone, Ubisoft say June boasted the game’s second best month ever in terms of active users, despite there not having been any new content since February. A quick glance at SteamCharts will tell you just how well its done this year, not counting all the players on console and going directly through Uplay.

Ubi in general are having a stellar year. They claim that Ghost Recon: Wildlands is still the best selling game of the year when counting digital and physical sales. They also pulled in 202 million euros last quarter, beating their own targets by tens of millions, and seeing a year-on-year increase of 45% – despite no major releases and 2016 having the massively successful launch of The Division to compare to.

As spotted by NeoGAF, they also had some forward-thinking announcements. They’re predicting Far Cry 5 to sell 7-10 million, between the numbers seen for the third and fourth games in the series. Assassin’s Creed: Origins should be between Syndicate and Unity. They’re also looking at PlayerUnknown’s Battlegrounds for potential new game modes in their current titles – The Division seems perfectly suited, as pointed out here. Finally, they’re happy that Red Dead Redemption 2 got delayed.

You can listen to the full call over on their investor site or download the PDF for all the figures. Overall, it’s good news for the publisher that had the most exciting E3 showing, and is managing to avoid hostile takeover.