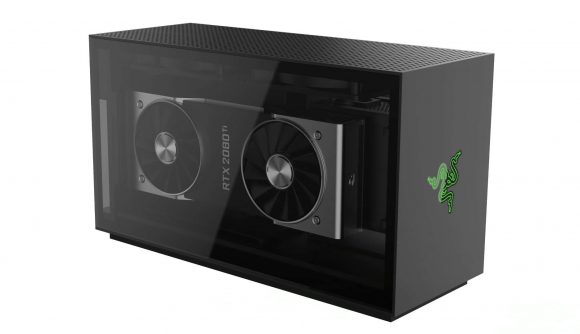 Razer has teamed up with Intel to be the first to announce a desktop PC based on the new NUC 9 design. The Tomahawk Gaming Desktop might look for all the world like an external GPU enclosure humped an Xbox Series X, but it’s a full, high-spec PC with an Intel Core i9 CPU and Nvidia RTX 2080 graphics card giving it the gaming grunt.

It’s the new Intel NUC 9 Extreme Compute Element that makes Razer’s pint-sized Tomahawk platform possible, and it really is a thing of technological beauty. From the 70’s brown PCB to the thick slab of copper cooling it feels like proper engineering. However much you might feel like AMD is in the CPU ascendancy at the moment, it’s hard to deny there really are some things that Intel does do well.

Available by the summer of this year, the Razer Tomahawk Gaming Desktop pairs the industrial design of the NUC module with a simple, understated aluminium chassis “flanked by tempered glass on both sides.” It kinda looks like the Microsoft Xbox Series X flipped onto its side, with added peep holes. Which isn’t a dig, I actually like the PC aesthetics of the next-gen console…

The new NUC 9 Extreme Compute Module, or NUC9ECM, in the interests of brevity and a nonsensical acronym, is essentially a whole PC in a graphics card form factor. The module’s PCB plumbs into a PCIe slot in the base of the Tomahawk N1 chassis, where a second PCIe socket waits to house the full-size discrete GPU you can pair it with. 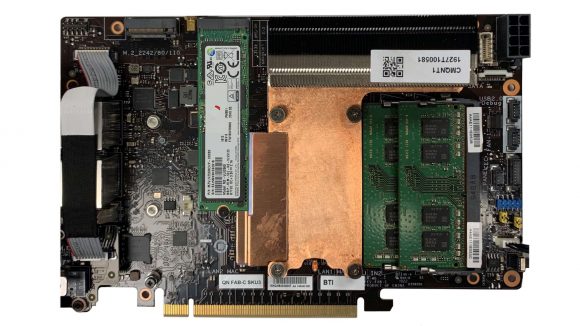 On that NUC9ECM PCB sits accessible SSD and RAM slots, allowing you to upgrade at will, and under that copper cooler is the Intel processor itself. From the looks of things that’s not going to be upgradeable by normal means. Essentially it’s a laptop CPU from the oblong nature of the chip, and it looks as though it’s soldered onto the board itself.

Intel has said the module offers users the ability to upgrade their CPU down the line, but I’ve got a feeling that might mean replacing the entire NUC9ECM… 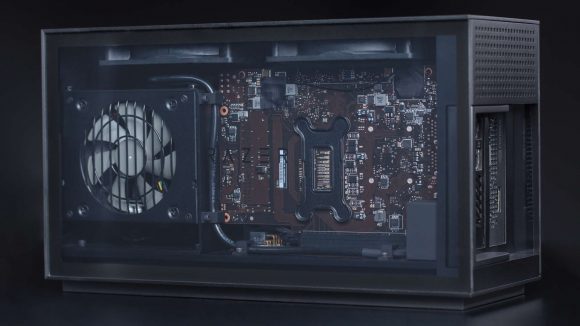 Razer is also going to ship the elegant Tomahawk N1 chassis as a standalone case, for “hardware-savvy PC enthusiasts looking to build their own compact yet powerful gaming PCs.” Whether you’re going to be able to fit anything but an Intel NUC9ECM inside it we’re not yet sure. It doesn’t look like you’d be able to squeeze a standard mini-ITX motherboard inside the elegant chassis.

Both the Tomahawk Gaming Desktop and N1 chassis will be available within the next six months, though I wouldn’t expect either to come cheap… we’ll let you know when we do.