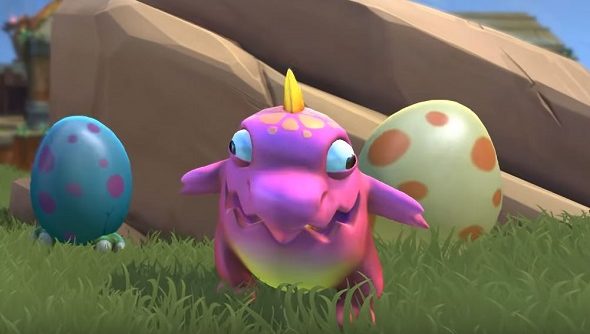 Realm Royale is kicking off its first Battle Pass this weekend, offering a 50% experience boost through today. The Battle Pass is themed around dinosaurs, and it offers players a chance to earn new mounts, chicken skins, emotes, and contrails as they level up their pass.

The new mounts are pretty flashy – you’ll be able to swap out your noble horse for something more akin to Jurassic Park’s velociraptors. There are two shown in the Battle Pass trailer, one with a two-tone brown color scheme and the other green with orange highlights and frill.

There are so many to choose from now, so check out our list of the best battle royale games for PC.

The dino mounts unlock at level 65, but as soon as you pick up your Battle Pass you’ll get a new skin for your chicken. It’s called ‘Great Eggscape,’ and replaces the nervous hen with an egg that sprouts two dinosaur feet.

There are new Battle Pass rewards for every 65 levels you earn in Realm Royale. Hi-Rez has a trailer for the Battle Pass, which you can watch here:

Even if you don’t purchase the Battle Pass immediately, all your Realm Royale progress will count toward your Battle Pass level if you decide to buy it down the road. And players who don’t buy in will still be able to earn rewards like a new avatar, crowns, and loading screens.

We’ve put together some Realm Royale tips to help make earning Battle Pass XP a bit easier if you’re ready to head out into the prehistoric fray.