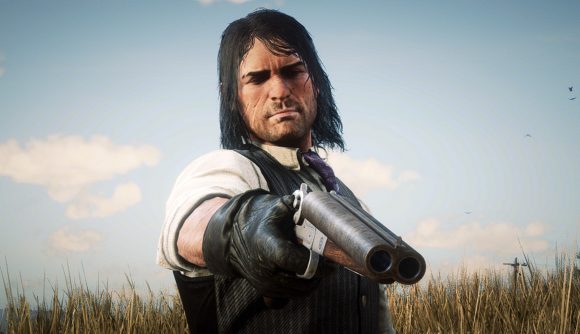 One of the many weird things that’s happened in Red Dead Redemption 2 since it originally launched in 2018 is the gradual – some might say, imperceptible – changes introduced to one of the franchise’s key characters, John Marston. He’s a different-looking guy when you get to the Western game’s epilogue. Naturally, there’s now a mod that lets you fix that, if you don’t like the direction he’s gone in.

GuiCORLEONEx794’s John Marston Restored Project v1.5 restores the beta and 1.00 versions of much of Marston’s in-game model, clothing, and kit. The idea is to have Marston look the way he did in the marketing screenshots released ahead of the game’s initial launch. The modder says it restores the beta version of Marston’s head and his original clean-shaven look. You also get the beta Red Dead Redemption trousers and the 1.00 set, as well as the beta’s grey shotgun coat.

As you can see from the image above, it’s a pretty faithful restoration of Marston’s look – even bringing him close to his appearance in the original Red Dead Redemption box art.

Here’s the catch: in order to use this mod, you’ll need LambdaRevolution’s Map Editor v0.7.0, which unfortunately is no longer available to download. If you already have it, great, but otherwise you’ll have to look elsewhere for your Marston fix.

If that’s the case, don’t worry: we’ve still got the latest on the latest weekly update in Red Dead Online, and we’ve looked at how modders are making the world of Red Dead Redemption 2 even more immersive. There’s still plenty of wranglin’ to do even if you don’t have the defunct map editor.