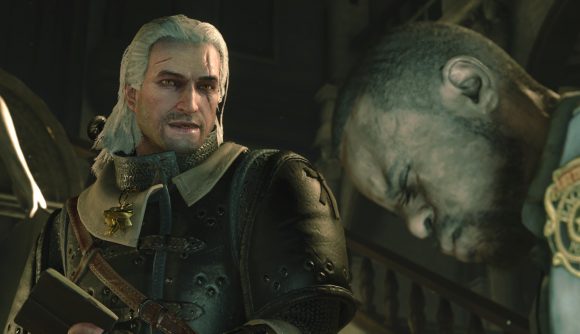 Toss some green herbs to your Witcher – he’s going to need them. With renewed excitement about The Witcher 3 following the launch of Netflix’s The Witcher show, it seems Geralt of Rivia’s now emerged ready to take on Raccoon City’s hordes of zombies. There’s a new Resident Evil 2 mod that replaces courageous cop Leon Kennedy with none other than The Witcher himself.

The mod, by creator Wiwilz, turns the overrun city’s newest recruit into Geralt as he appears in CD Projekt Red’s 2015 RPG The Witcher 3, specifically with his full Feline – or Cat School – armour on. From the images shared of the mod, it looks like it’s the mastercrafted version, with the cream-coloured collar, and Geralt’s gold wolf pendant hanging over it. The outfit it replaces is Leon’s Arklay Sheriff DLC costume.

It’s true Geralt looks a little out of place lurking around Raccoon City’s near-modern day, zombie-infested police department, peering around its shiny corridors and comforting poor Lieutenant Marvin Branagh as he sits wounded. However, the total likeness with his home game appearance means you can view this as just another of The Witcher’s adventures, right? Right.

Best of all, you can give him a companion – the very same modder has handily created a Ciri replacement for Claire Redfield’s Noir outfit, so The Witcher can tackle the undead alongside his Child of Surprise. Neat.

If you’re keen to grab the Resident Evil 2 Geralt mod, you can do so at Nexus Mods here, and you can download the Ciri mod here.

In other news, you can now get a look at how The Witcher’s best fight scenes were made shot by shot – Geralt (Henry Cavill) and Yennefer (Anya Chalotra) can give you the run down.