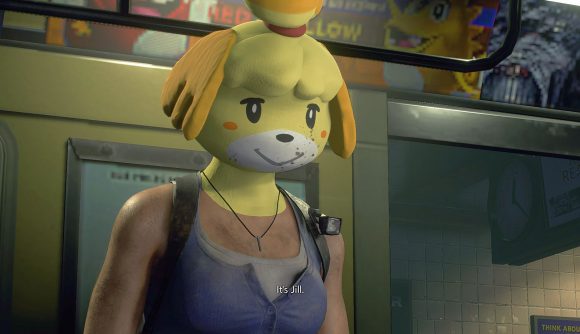 Animal Crossing: New Horizons and Resident Evil 3 probably aren’t two games you’d naturally put together. One half of that combination isn’t even out yet, but that hasn’t stopped modders from getting creative in the world of Raccoon City, following the Resident Evil 3 Remake demo release. Thanks to one creator, you can now let Jill Valentine take on Nemesis with an Isabelle mask.

You remember Isabelle, right? Animal Crossing’s sweet, golden Shih Tzu with a ponytail and winning, can-do attitude? Modder Crazy Potato has popped her head onto the automatic rifle-toting hero of Capcom’s new Resident Evil 3 remake, so now she can take on the menaces of the overrun city looking (mostly) like a Nintendo Creation. The reason? “Jill is a fan,” the mod’s description simply reads. Fair enough.

Screenshots showing the mod in action are really something. There’s Jill, getting stuck into some combat, lurking in the shadowy streets with a rifle – you know, the usual, at least in the overrun Raccoon City, anyway. But all with a grime-spattered version of Isabelle’s sweet little face.

If you’re keen to grab the mod for yourself and have Animal Crossing’s adorable de facto mascot take on the Nemesis, head to Nexus here. As ever, mod at your own risk!

In the meantime, take a look at our Resident Evil 3 review ahead of the full horror game’s arrival on PC on April 3. PCGamesN’s very own Jordan Forward notes it’s “a great follow-up to last year’s Resident Evil 2 Remake, but it loses some magic by upping the pace”.

We also have a list of PC games like Animal Crossing if you’re keen to jump in on the action but are based on our home platform.