Before the Roccat Kone XP came into my life, it was pretty difficult to make a case for RGB lighting on a gaming mouse. After all, it doesn’t usually pack as much of a punch as the illumination on a gaming keyboard and you’re always going to cover it with your hand. But now, you can consider me fully converted, as Roccat’s ‘3D RGB’ lights thread your setup together in a way few other rodents can.

The headline feature gets its name from the way the lighting shines underneath the translucent shell, where eight pipelines filled with 22 LEDs beam brightly. The build itself is two-tone with a clear top and opaque, rubber sides so you don’t lose your grip. This might divide opinions when the lights are off, but it personally evokes nostalgia of the clear case Nintendo Game Boy and other tech that proudly displays its innards.

When the lights are on, however, Roccat takes it to the next level. It has the same 16.8 million colours we’ve come to expect on our glowing devices, but the Kone XP is the most vibrant gaming mouse I’ve ever seen and is sure to turn heads.

The moment you plug it in, you’re met with a rich radiance of colours as it cycles through the spectrum. You can customise this by downloading the Roccat Swarm software, which walks the fine line of feeling robust without being too bloated.

There are seven different effects to choose from, including your usual wave, fully lit, heartbeat, breathing, and blinking modes, as well as the two Roccat-specific alternatives: AIMO intelligent lighting and PhotonFX. It’s difficult to describe AIMO lighting as there’s no consistency to the shifting colours, but it’s similar to the wave effect and the lights react to your clicks. PhotonFX, on the other hand, has a sci-fi vibe in that it looks like a charging energy weapon, which is easily my favourite of the bunch.

The Roccat Kone XP isn’t all about form, though, as it affords you enough functions at your fingertips to make the most intense MMO, MOBA, or strategy game a little easier. There are 15 programmable buttons including the four side buttons, thumb key, two buttons sitting on the left clicker, and the 4D scroll wheel you can tilt to the left or right for additional inputs. Holding down the thumb button activates Roccat EasyShift, which effectively doubles the amount of inputs you can have to 29 different combinations. Realistically, this trims down to around 24 custom functions if you don’t tamper with the default scroll wheel, left click, and right click, but this is still plenty for almost any situation.

The Roccat Kone XP is fantastic for MMOs, MOBAs, and strategy games, but maybe not for FPS games

While it’s great for most genres, it might not be ideal for competitive FPS games. Nvidia Reflex support works a charm when playing compatible games like Rainbow Six Siege, but there’s a relatively steep learning curve to using the four buttons clustered on the side without accidentally mashing multiple at once in heated moments. It’s also fairly chonky at 104g, which is 26g lighter than the Roccat AIMO Remastered that precedes it and other button-heavy mice, but still a good deal heavier than most rodents in a space that aims to shed weight. The ‘PhantomFlex’ cable and PTFE feet go a long way to helping it glide seamlessly despite its heft, but you’ll notice the weight if you regularly lift to reposition your mouse.

Speaking of the PTFE feet, the protective covers that envelope the glides to stop them from scratching are more of a curse than they are a blessing. They look shiny and new underneath, but whether you’ll be able to peel them off is another question. The protective covers are so fiddly to remove without a tab to pull that I ended up leaving the film ring around the sensor throughout my entire time using the rodent. 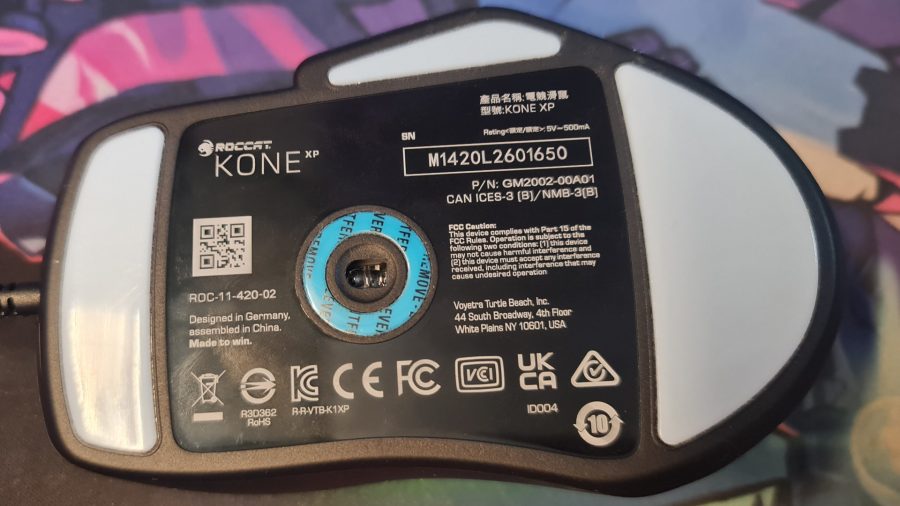 Under the hood lies a Roccat Owl-Eye 19K optical sensor that performs as good as the best gaming mouse on the market. It feels like it’s hardly worth mentioning the 19,000DPI ceiling since gamers very rarely climb that high, but it’s there if you want to make it one of your five DPI stages or five profiles for some reason.

Roccat Swarm gives you a boat-load of options to customise

As you’d expect, you can adjust the DPI settings in the Roccat Swarm software. In fact, it offers quite the range of customisation options, including lift-off distance, polling rate, angle snapping, horizontal tilt speed, double-click speed, and even your Windows pointer speed so you don’t need to constantly change DPI coming in and out of your game.

I can’t speak to Roccat’s claims that its Titan optical switches are rated for 100 million clicks or that they’re faster than the competition, but they are pleasing to press and very responsive. The click itself is far quieter than the SteelSeries Rival 5 and Razer Viper Ultimate I have to hand, so it won’t be as annoying if you’re sharing your space or you refuse to use push-to-talk on Discord with your gaming microphone. 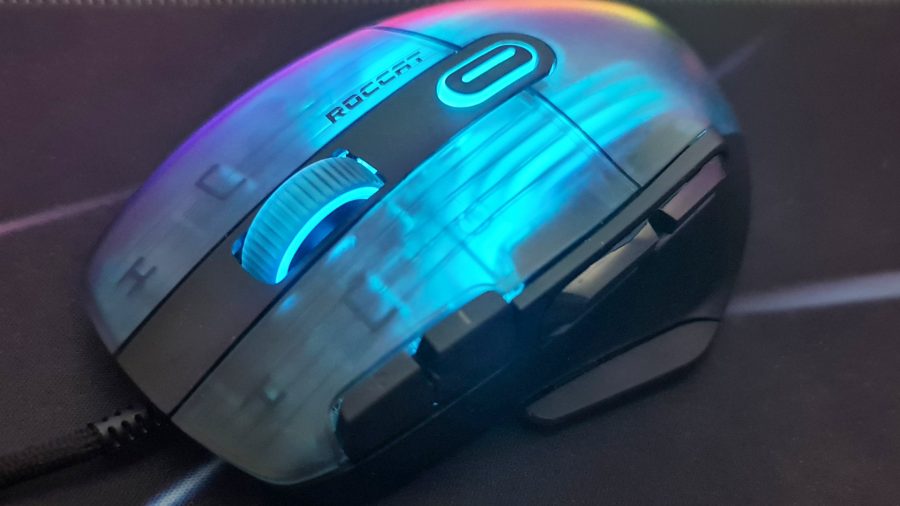 At an $89.99 MSRP, the Roccat Kone XP isn’t cheap. The plastic shell occasionally makes it feel a little less premium than its price point might suggest, but it otherwise does everything it sets out to do, and does it well. At just $10 more than the Kone AIMO Remastered, you get more buttons, less weight, and significantly brighter RGB lighting – although it’s worth mentioning that its predecessor often has a discount attached to it.

Any RGB enthusiast should consider adding the Roccat Kone XP to their arsenal as no other rodent does it better. It’s a little lighter than other button-clad mice and offers an overwhelming amount of customisation thanks to Roccat EasyShift. And it’s under $100 best of all, but if lighting isn’t your bag, both the Razer Naga Trinity and Corsair Scimitar RGB Elite offer a similar amount of customisable buttons for a similar price.

You'll pay a slight premium for the luxury to own the brightest gaming mouse around, but very few other rodents look as good sitting on your mouse pad.