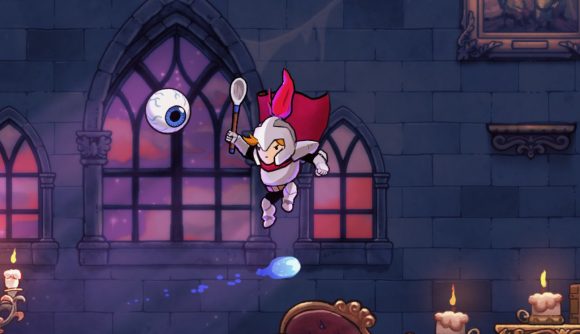 We found out about Rogue Legacy 2 only a couple months ago, and were excited when we heard it was coming to early access July 23. It turns out it needs a little more time in the oven, though. Cellar Door Games says it’s moving the early access launch back a couple of weeks to August 18.

The studio says it has encountered a few setbacks in the process of preparing the game for launch, and that it’ll need a bit of additional time to iron those problems out before letting the general population get its hands on the indie platform game. That’s pretty understandable, but to break things down to a more basic level, Cellar Door explains that “game development is like football. It’s weird, unpredictable, and we don’t know the rules.”

The good news is that the delay is also providing the studio with enough time to finish a few additional elements of the game before shepherding it into the verdant pastures of early access. “Some features got so close to completion that we just absolutely had to see them through,” the studio says in a tweet.

Ultimately, that’ll mean more stuff to do in Rogue Legacy 2 when it does open up for public consumption.

An update on the development of Rogue Legacy 2 pic.twitter.com/wjUIoEiiD4

“In our opinion, the game is already good,” Cellar Door says. “But these few extra weeks will help us turn this football into a homerun!”

Oh dear. Well, once they get a chance to take a break, we recommend Cellar Door checks out some of the best football games on PC for a refresher course.