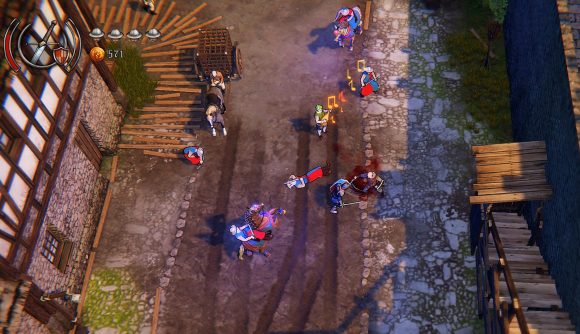 In the upcoming PC game, you play as “anti-hero Guy”, the devs reveal in a press release – a peasant determined to win a grand tournament, and cause some carnage along the way. You can get an idea of this in action in the alpha version gameplay trailer below. It’s very much like a top-down GTA game, complete with high-speed car(t) chases, pedestrians to mow down, horse-mounted coppers with flashing red and blue lights, and – of course – all the “absurd quests” and pop culture references you’d expect from a classic Grand Theft Auto.

There’s even a Monty Python and The Holy Grail joke squeezed in – you know the one: “It’s just a flesh wound!” Plus, you can hire a walking ‘radio’ – that is, a personal bard – if you’re keen to hear some tunes during your antics.

Take a look at Rustler for yourself below:

If you’re keen to give it a go, the good news is its prologue – a “story introduction” to the game’s full version rather than a demo – is live to give a go on Steam right now. The full game hits Steam Early Access on February 18, with Rustler’s full launch to follow sometime later this year.

While you wait, we also have a list of the best medieval games on PC if you’re on the lookout for something new – but set in the old days – to try.