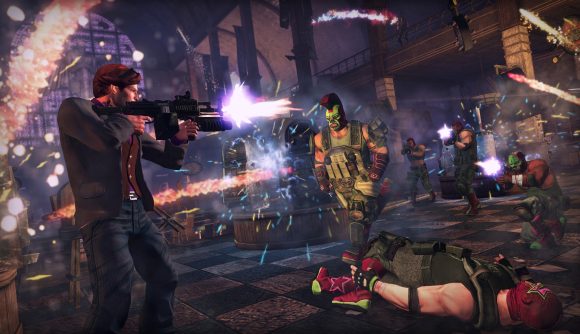 Eurogamer spotted the new ESRB listing, noting that the remastered version of Saints Row: The Third will be released for PC, PlayStation 4, and Xbox One. The original, which launched in 2011, was designed for PlayStation 3 and Xbox 360 hardware.

If you’ve played any of the Saints Row games (at least after the first one), it’ll be no surprise that the ratings listing makes for entertaining reading. There’s the usual Grand Theft Auto-style mayhem, of course: “Players use machine guns, shotguns, swords, rocket launchers, and grenades to kill rival gang members,” the listing reads, before going on to explain that “players can also use chainsaws to hack at enemies, resulting in small chunks of flesh and large splatters of blood.”

It’s not mentioned in the listing, but Saints Row: The Third also features the late, great Burt Reynolds, who plays himself, and you can also sing along as a zombie to Sublime’s ‘What I Got.’ So yeah, lots of fun stuff to do.

All has been fairly quiet on the Saints Row front for quite a while – the last we heard, Saints Row 5 was “deep in development” by Volition, now owned by THQ Nordic. We don’t know when that’s due out, but it seems likely that Saints Row: The Third Remaster is meant to whet players’ appetites for a forthcoming sequel.