Nvidia aims to take the big screen gaming world by storm later this year when it launches its Big Format Gaming Displays, in conjunction with Asus, Acer, and HP. But why wait that long when you can an arguably get a better, cheaper experience from kit you can buy today?

We paired Samsung’s flagship Q9F QLED TV up with the mighty Nvidia Shield TV to deliver a gaming experience which has practically everything on offer with the BFGDs, but for likely a fraction of the price. The only things missing are an expensive G-Sync module and a colour-draining 144Hz refresh rate when gaming.

The best gaming monitor can make a huge difference to your PC setup.

Of course, those features are a big part of what makes the BFGDs such tantalising devices, with vast screen real estate and built-in game streaming hardware from Nvidia. But the G-Sync module and high refresh rate are also at least partly responsible for making the first 4K G-Sync HDR monitor, the Asus ROG Swift PG27UQ, such a disappointment.

It was the G-Sync electronics – itself with a reportedly with a $500 price tag – coupled with the DisplayPort 1.4 connection, which meant the screen couldn’t hit the necessary colour depth at 4K and at 144Hz, so the fact they’re missing means they’re not necessarily a glaring omission from our new setup. And I’ve got to say the Samsung Q9F is a rather stunning piece of industrial engineering, far more aesthetically pleasing than the BFGD prototypes we’ve seen so far. It’s slim, almost entirely bezel-free and that makes its 55-inch panel seem utterly vast.

The One Connect box is also a really smart bit of design, using a single break-out box for all the inputs and outputs of the TV, with only a string-thin cable going into the ultra-skinny panel to deliver the goods on-screen.

Of course the 65-inch BFGDs I saw out at CES in January were a lot bigger. I could have picked the 65-inch Samsung Q9F to go in this wee test, but that genuinely wouldn’t have fit into my living room. I understand there will be lots of folk out there smugly proclaiming that wouldn’t be an issue for them, but for the majority of us it’s genuinely a real sticking point. It turns out you can have too big a screen.

The Samsung Q9F is also sporting a rather stunning panel. It’s still an LCD – don’t confuse QLED with OLED – but even so it has gloriously deep black levels, something that’s necessary for really good HDR reproduction. As is a broad colour spectrum, and thankfully the ultra wide gamutin this flagship flatscreen TV, made available by Samsung’s own quantum dot filter, is quite something to behold.

While the BFDGs and the PG27UQ claim peak luminance of around 1,000cd/m2, the Samsung Q9F is capable of topping that by some way. With peaks sometimes measured up to the 1,800cd/m2 mark the Q9F can really deliver the brightest images you’ll ever have seen, and yet is still capable of doing it without ever becoming uncomfortable to view without the aid of dark glasses. 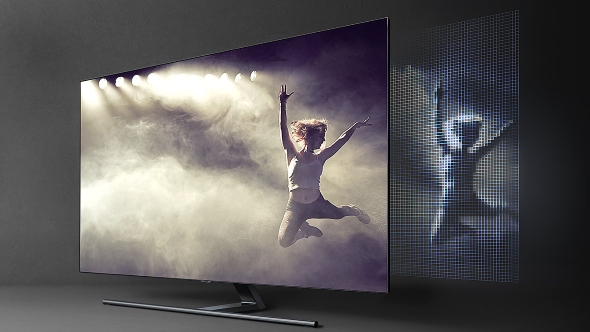 The full array backlighting means that it can control both the peaks and depths of a high-contrast image without the sorts of halo-ing we saw on the prototype BFGD devices we checked out at CES this year. That’s important for this panel to be able to deliver on the full promise of HDR gaming, something TVs are far more adept at than even the latest PC monitors.

We plumbed HDR-favourite, Resident Evil 7, into the Samsung Q9F, via the brilliant Nvidia Shield box, and had it running from our Titan X Pascal-powered gaming rig at 4K with all the HDR goodness you could want. On the PG27UQ, and its ProArt PA32U stablemate, the peaks of HDR gaming are ably represented, but the darker scenes – something Resi 7 loves to throw at you – all but demolish any detail in the visuals, subtle or otherwise. They leave the game a struggle to enjoy on any level. 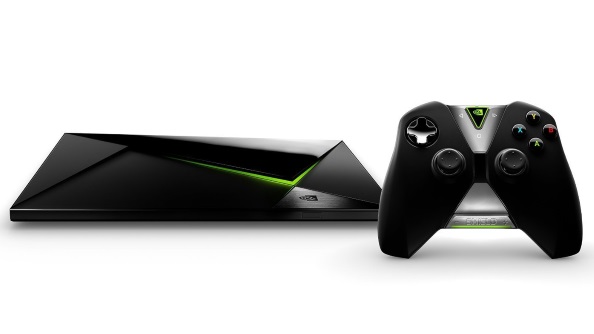 But on the Samsung screen Resi 7 remains clear and vivid, but with the contrast performance of the Q9F you get both the necessary detail in the darkness as well as the peak brightness of the grimly flickering fluorescents, with losing any tonal subtlety in between. It delivers an arresting gaming experience you’ll not see with any HDR PC monitor yet available.

It’s the same in Far Cry 5, with the rich Montana countryside looking stunning in 4K HDR. The fact that 4K HDR gaming is viable across the Gamestream feature in the Nvidia Shield, let alone as seamless as it feels, is testament to the power of that wee Android-powered device. But even without the Shield you could get some lower-spec PC gaming done via the Steam Link app you can install on the Samsung’s built-in Eden OS interface.

And, if you’re not down with the green team at all, Samsung’s Q9F also now supports FreeSync, making it a willing companion to an AMD-powered gaming rig. Though you might need to go all in with your Radeon GPUs to drive the 4K panel. 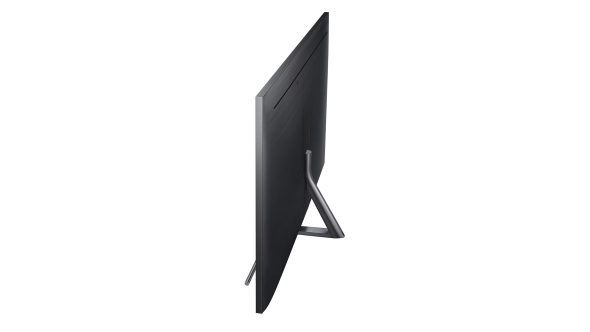 When it comes to big-screen gaming displays you’re going to have to go some to find a panel that can bring as much to the table as Samsung’s top-end TV. Of course that $3,000 (£2,499) seems quite prohibitive at first glance, but if you’ve entertained any thoughts towards the 4K HDR G-Sync monitors from Asus, Acer, or HP, then you’re going to be paying at least that for the privilege.

If you go for the PG27UQ then you’re paying the same for a worse panel and a smaller panel. And if you’re waiting around for the BFGDs then you could also be making a compromise on the display quality in favour of a higher refresh rate but with limited colour depth. And there’s also the fact that we still have no idea when they’re likely to appear. The first 4K G-Sync HDR panels appeared at CES in 2017 and have only just gotten close to release, while the BFGDs are still in the prototype stage despite Asus’ PG65 actually getting a specs-lite listing.

It could be a long time before any of the BFGDs actually make landfall, and they’re not going to be any cheaper than this gorgeous screen.

Our recommendation? Pick up one of Samsung’s stunning QLED TVs for the same price (actually probably less than a BFGD) and stick an Nvidia Shield into your shopping basket while you’re at it. It’s the perfect way to get high-performance HDR PC gaming in your living room without having to lug your powerful gaming rig down the stairs.

Don’t wait for the ephermeral promise of the BFGDs, this stunning Sammy TV will give you a much better time, trust us.