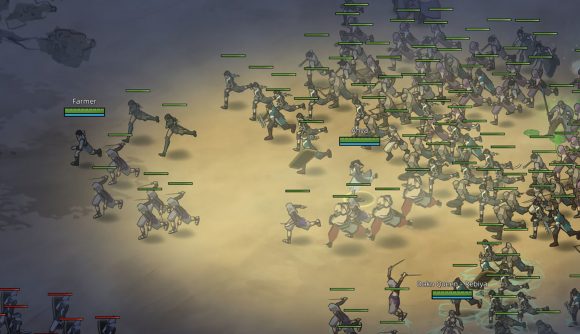 Sands of Salzaar is already a hit, even though most English-speaking players haven’t heard of the open-world game that sold 50,000 copies in its first three days on sale. Up until now, only the Chinese language version has been available, but that’s about to change. Sands of Salzaar has a full English translation that will be available September 22 on Steam.

Sands of Salzaar is an interesting mix of strategy and RPG games. You have the customary individual character progression with skills to unlock and gear to equip, but rather than managing a single character or even a party, Sands of Salzaar lets you recruit a whole army from the ground up. Much like Mount & Blade II: Bannerlord, you take on the role of a warchief in this odd, sketchy little hand-drawn world. Unlike Mount & Blade, however, you’ve got a wide range of magic at your disposal.

From the start, you’re given free reign to explore the desert around you, helping chieftains, exploring ancient ruins, and fighting off bandits. There’s not a lot of guidance given, and some aspects of the game appear simplistic at first – but there are depths to be plumbed here.

There are dozens of potential starting classes and companions to unlock, and depending on how you set up your campaign, you can even recruit mythological creatures like dragons and phoenixes into your warband. They’ll fight on their own, but you can level your party members up with new abilities, weapons, and gear.

Developer Han-Squirrel Studio has given us an exclusive first look at the new English-language Sands of Salzaar gameplay trailer:

There’s plenty in there to explore and discover, and we’ve enjoyed our brief time with the new build so far – the desert theme and exciting real-time combat sequences, plus the mysterious air of everything going on, are enough to keep us wanting to see what’s around the next corner.

Sands of Salzaar is in Early Access, and the English language update adds about 500,000 translated words that include some 30 new questlines. Plus, there’s full mod support through the Steam Workshop, which should keep Sands of Salzaar feeling fresh for quite some time.