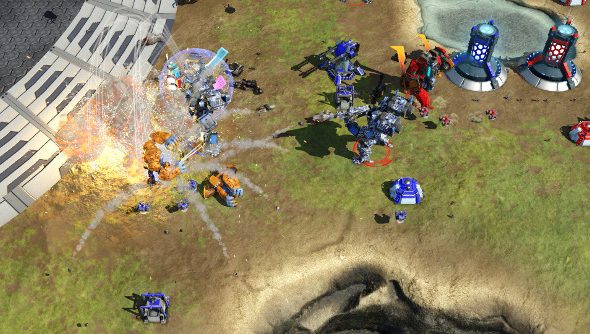 Stardock has a full plate when it comes to sci-fi RTS games. There’s Oxide and Stardock’s gargantuan Ashes of the Singularity, Mohawk Games’ Martian economics sim, Offworld Trading Company and now Servo, a mech-based RTS from the makers of Age of the Empires.

The three games could hardly be more different, and on the surface Servo doesn’t even share much with Age of Empires. It’s all about instant engagement, 10 minute matches where huge mechs duke it out with building-sized swords and missile launchers. It’s a surprising direction, and who better to explain it to me than a man who has been designing strategy games for over 30 years: Bruce Shelley.

Shelley’s been designing games for over 30 years, first working on tabletop games, and then shifting to PC games in the late 80s. At Microprose he worked on the original Civilization and Railroad Tycoon and later, at Ensemble, he helped bring to life Age of Empires. But those heady days where RTSs ruled the roost are long gone, and it’s now a genre dominated by only a few big games. 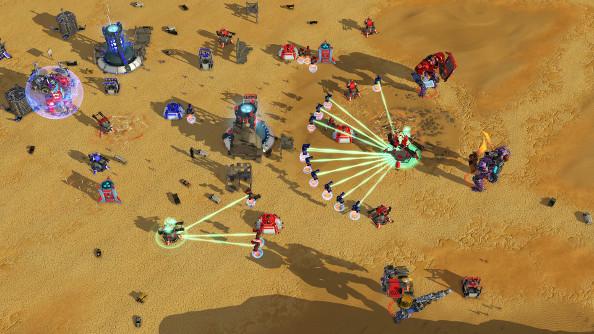 It’s easy to get a bit gloomy when contemplating the state of RTSs, but Shelley and Bonus XP have turned this tumultuous time into an opportunity.

“We thought that the RTS was a neglected genre that could be revived,” he tells me on Skype. “There was an opportunity there. It had been one of the most popular genres in gaming 15 years ago, and there was no reason why it couldn’t be again if we could shape it for what seems to be the tastes of gamers today.”

And what are those tastes? Bonus XP looked at the games that dominate PC, games like League of Legends, and believe that what people want is intense matches, usually shorter than those that you’d find in traditional RTS games, where they only need to worry about a single or small number of units.

Bonus XP is taking those principles and applying them to an RTS.

“PC gamers have been really involved in first-person shooters and now these types of… League of Legends and games like that. They don’t want to spend half an hour, an hour playing an Age of Empires II game. They’d rather play three or four of these other games in the same period of time, and that’s what we’re trying to build: an RTS that you’ll recognise as an RTS and it’ll have the same engagement and type of play, but it’ll be a much shorter experience.” 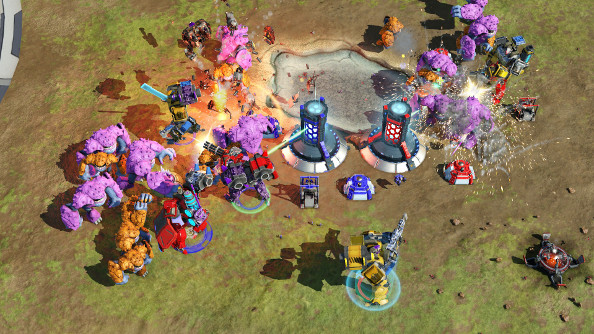 Key to this is the reduction in the number of units you’ll control. Instead of an lots of troops or massive armies, the focus is on the titular Servos, repurposed mining mechs that now spend their days fighting. You’ll take control of one of these servos, a one-mech army, and fight across small maps in a future Earth.

These Servos start out as mining mechs that don’t have much more than a knife to fight with. The knife is, of course, the size of a bus, but it also has to cut titanic killing machines and monstrous mutants. But, not unlike Dawn of War II or a million MOBAs, these initially under-prepared mechs will eventually sport new gear that makes them effective steel warriors. Servo will ship with around 500 parts that can be slapped onto these repurposed mining machines, including gargantuan swords, grenade launchers, laser rifles and pistons transformed into big, pummelling weapons. And the more battles you win, the more parts you get.

Let’s not forget about the people riding these behemoths into battle, though. Pilots are another part of a Servo’s loadout. 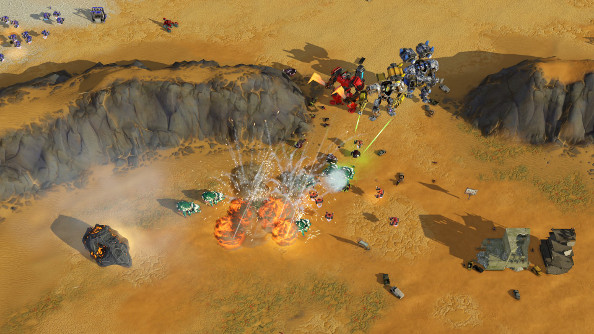 If they aren’t in a Servo, people aren’t really very important. They’re like “cheap extras in a big film,” Shelley tells me. When the Servos come crashing to the Earth, they don’t care about what’s below them. Cars get knocked back, people get crushed, all in all it’s probably a pretty bad day when a Servo shows up.

The progression system that transforms the Servos from mere industrial machines into war machines is not unlike the sort that you’d find working away inside an RPG, and that’s a genre that Shelley dabbled in back at the start of the ‘80s, but it’s a relationship that didn’t last for very long.

“The first commercial projects I worked on were [tabletop] RPGs, Middle-Earth roleplaying stuff for a company called Iron Crown Enterprises, based on Lord of the Rings. But I only did that for about a year and a half, I wasn’t really a huge RPG player, I found that I wasn’t as engaged as I was when I was playing a true strategy game.”

While Servo has system that roleplayers will be familiar with, it’s still, ultimately, a strategy game, but one where systems from other gaming realms collide. Back when it was being teased, Stardock was calling it a “new kind of RTS”, but that’s not quite the case. It’s made up from old ideas, but is being constructed in a different way.

“There’s lots of good ideas floating around, and I think what many people making games are doing is finding new ways to smash a variety of ideas together to make something new,” says Shelley. “How many really original ideas are there in the world? Not many, but there’s lots of moving parts and putting them together in a new way can be very successful.” 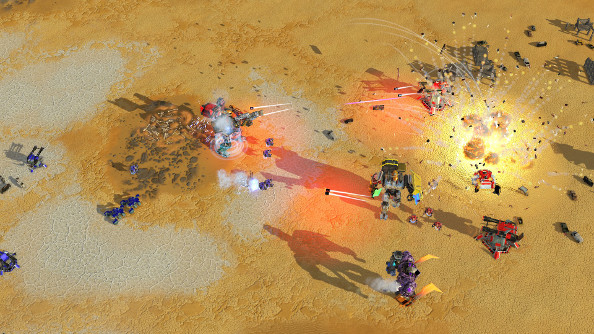 That new way, in the case of Servo, is cutting out a lot of stages found in traditional strategy games: the exploration, the economy management, the slow, deliberate construction of large combined arms forces. Servo’s maps are small, with the whole thing revealed to players from the get go, offering little to explorers, but a lot to people who just want to fight, either in PvE or PvP, with AI and other players.

“There’s a period in the Age games that I think some people really enjoyed, they lingered through the build up, but other people raced through that to get to what they thought was the real action,” notes Shelley. “We’ve built a game for people who want to get through that quickly and get into the engagement fast. That’s what we think the market is looking for today.”

I wondered if constructing it in such a different way from Age of Empires necessitated learning how to build an RTS all over again, but Shelley says that’s not the case.

You’ll be able to take the mechs for a spin yourself when Servo launches on Early Access later this year.