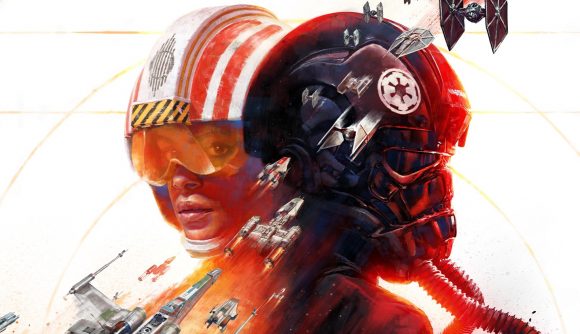 Star Wars: Squadrons, a multiplayer space combat game, was leaked last week on the Xbox website, and EA will show off a teaser for the game today. You’ll be able to see it as it airs below.

A listing that appeared briefly on the Xbox website has revealed all new details about Star Wars: Squadrons. Previously known as Project Maverick, Star Wars: Squadrons is a space combat game that will have players piloting various vehicles from the Star Wars universe in multiplayer team battles, according to reports.

VentureBeat’s sources say Squadrons has a single-player campaign, but like Battlefront, the main focus of the game is on the multiplayer component. There’s no word yet on whether the action is from the pilot’s cockpit perspective like in the classic X-Wing and TIE Fighter games or the more arcade-style, third-person view featured in Battlefront II’s space battles. Odds are pretty good that it’s the latter, although we’ll have to wait and see to know anything for sure.

VentureBeat says Star Wars: Squadrons has come out of EA’s push to develop Star Wars games faster to better take advantage of the Disney license. Other Star Wars related projects the publisher has explored have been cancelled, but it seems Squadrons is the “smaller, more unusual” title hinted at by EA back in February. If that’s the case, it may be the plan to release it by the end of 2020.

After the Star Wars: Squadron leaks were published, EA confirmed the existence of the game. The company says it will broadcast the reveal trailer June 15 at 16:00 BST / 11:00 EDT / 8:00 PDT. You can tune in on YouTube.

Whether Squadrons will take its place among the best Star Wars games remains to be seen, but the one thing we can be sure of is that we’ll be finding out more during the reveal event June 15. You can check our schedule of online E3 events to find out when the rest of the streams are and how to watch them.