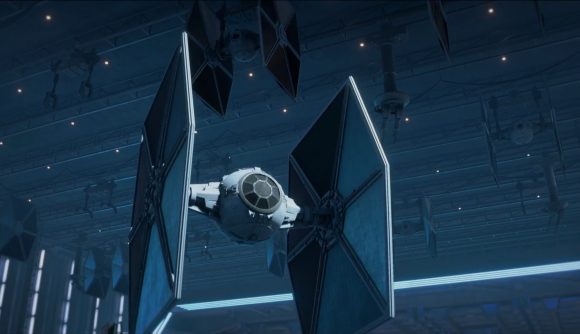 New footage shown at EA Play tonight has revealed the ship roster for Star Wars Squadrons, the upcoming space combat game from EA Motive. Both Imperial and New Republic sides will have four classes to use to compose their squadrons, and each of those features a well-known Star Wars ship design.

Ship classes will matter most of all in Squadrons’ Fleet Battles mode, which EA says is the ‘signature’ mode for the game. This objective-based mode is kind of a tug-of-war series of encounters that begins with a dogfight in the center of the map. The winner of this will then attack two mid-size enemy capital ships, while their opponents will have to defend. If the defence fails, the winning squad will have a chance to destroy the opposing flagship, winning the game.

Squadrons encourages players to work together, and to do that you’ll need a well-rounded team. Fighters, your bread-and-butter X-Wings and TIE Fighters, are good all-rounders and can fill in just about any role. A-Wings and TIE Interceptors form the interceptor class, which are fast, light, and manoeuverable – perfect for hunting down and pursuing enemy fighters. Bombers – TIE Bombers for the Imperials and Y-Wings for the New Republic – are your heavy strikers, doing major damage to objectives. TIE Reapers and U-Wings represent the support class, which can heal teammates and disrupt enemies.

Here’s that footage, for reference – or if you just want to look at those gorgeous skyboxes again:

Star Wars Squadrons arrives October 2 on Steam, the Epic Games Store, and Origin, and it’ll support cross-play across all platforms and storefronts.