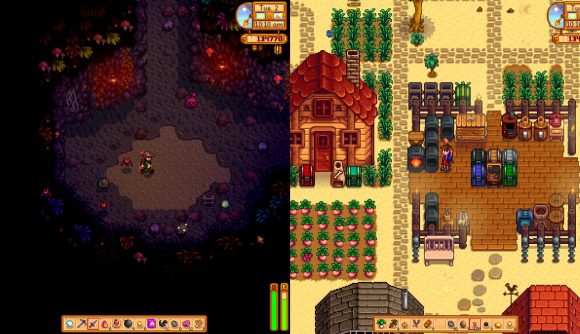 The next Stardew Valley update will be bringing splitscreen co-op to the farming game. The creator confirmed the addition, and some other details, on Twitter recently.

Eric ‘ConcernedApe’ Barone, the mastermind behind Stardew Valley, dropped a bombshell regarding the upcoming content by tweeting that splitcreen co-op will arrive as part of update 1.5. “In Stardew Valley 1.5, there will be splitscreen co-op,” his tweet declares, with an in-game screenshot of what the multiplayer experience will look like.

Like any typical local co-operative mode, the screen will be split into parts, depending on how many are playing. In the example given, it’s two, with full UI either side. The amount of space allowed between players seems like it might be quite large, if there’s any barriers at all, as the two sides are clearly in very different terrain. In a follow-up tweet in replies, Barone confirms the feature is coming to all platforms, however PC is the only place that’s guaranteed to support up to four players, whereas others “might be limited” to only two.

Barone’s screenshot contains a wealth of hints at bits and bobs that’ll be coming to the indie game. Eagle-eyed players have identified desert farms, a new telephone stand, torches in fence-posts, new chests, and more.

In Stardew Valley 1.5, there will be splitscreen co-op! pic.twitter.com/n7XhPWSuSi

We previously learned that update 1.5 may contain banana trees. No release date just yet, but we’re coming up on a year since update 1.4, so an annual November roll-out might be a thing. If you’ve never tried Stardew Valley multiplayer before, we have a handy guide, and a list of the best Stardew Valley mods, to keep your crops happy until fresh content arrives.