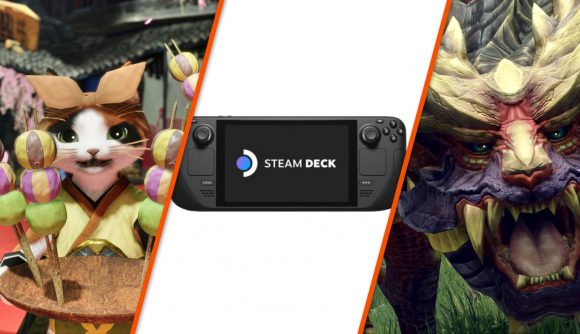 Coming full circle from its handheld roots on the Nintendo Switch, Valve has dubbed the PC version of Monster Hunter Rise as ‘playable’ on the Steam Deck ahead of the first wave of devices shipping next week. The certification comes as part of its chonky Proton 7 update, and is just one of 22 games that are now compatible with the portable gaming PC, including Forza Horizon 5, Yakuza 4 Remastered, and Persona 4 Golden.

It’s worth noting that ‘playable’ is a distinct category compared to something that’s fully ‘verified’ by Valve. It means the company recognises that a game ticks most boxes in order to run comfortably, but it might come with a few caveats or hiccups, such as a lack of touchscreen or native controller support or other issues. For example, Sea of Thieves fell into the playable group when Proton 5.13-1 released back in October, 2020, but has only just received fixes for its voice chat and multiplayer bugs.

Valve has picked up the pace in recent months, however, hiring people to manually review all 50,000 games on Steam. It surpassed 100 playable games at the end of January, added 70 more just over a week later, and currently sits near the 200 mark (with more than 242 verified).

You can check out the Proton 7 patch notes to see all of the tweaks Valve’s made to the platform. Here is the list of newly playable games:

Since the Steam Deck release date is just around the corner, you might be wondering how your library will fare with the device. Well, we have some good news, you can check the Steam Deck compatibility of your Steam games using a third-party tool called CheckMyDeck.